THE circumstances attending the death of a Mr. and Mrs. Joel Blazley, of Carcoar, are most pathetic. The deceased couple had been suffering from pleurisy for some time, and although two medical men were called in, and all that love and science could suggest was done, Mrs. Blazley expired on Tuesday, and was followed by her husband on Thursday. Two similar cases to the above have occurred within the last two weeks,.viz., Mr. and Mrs. R. Kelaher, of Lucknow; and Mr. and Mrs. Bloomer, of Brisbane.

Is Joel your ancestor? Please don't go away!

ask our community of genealogists a question.
Sponsored Search by Ancestry.com
DNA
No known carriers of Joel's DNA have taken a DNA test. 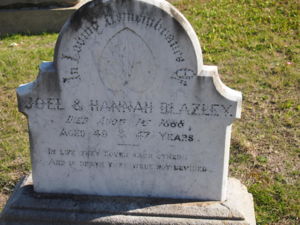