Ezekial Blinman, the son of Richard Blinman and his wife Mary, was born on November 11, 1643 in Gloucester, Massachusetts.[1][2]

Besides his birth, the only other record of Ezekiel that has been found is a 1659 deed by his father of his farm at Harbor's Mouth to John Tinker that Ezekiel witnessed.[3]

Based on the fact that Ezekiel is not mentioned in his father's will dated April 13, 1681,[4] Ezekiel presumably died before that date.

Richard Blinman's 1681 will includes bequests to daughter-in-law Martha Blinman and her daughter Anne. Greenwood, in his 1900 NEHGR article on Richard Blinman suggested that Martha was the wife of Richard's son Nathaniel, perhaps because the bequest to her follows that made to Nathaniel.[2] However, a number of elements of Richard's will indicate that Martha's husband and Anne's father was deceased, which indicates that they had been the wife and daughter of Richard's son Ezekiel. Those elements are the fact that (1) nothing in the will indicates that Martha and Anne were the wife and daughter, respectively, of any of Richard's sons mentioned in his will, (2) the bequest to granddaughter Anne was a chest containing money and other things that appear to have been more valuable than any of his bequests to his children or other grandchildren and which was put in the custody of trusted friends, (3) granddaughter Anne is referred to by Richard as "now with me", which indicates that she was living with him rather than her father, (4) in his will, Richard directed son Jeremiah (not her father) to take care of Anne's education, and (5) in the will, Richard indicated that Anne's mother, Martha, and the keepers of the trunk (not her father) would provide things for Anne's maintenance.[4] No doubt for these reasons, David L. Green, in his 1980 article in The Genealogist on "Mary, Wife of the Rev. Richard Blinman," similarly concluded that Martha was probably the widow of one of Richard's deceased sons rather than the wife of Richard's son Nathaniel, and suggested that she was most probably Ezekiel's widow.[5]

Since there is no record of Ezekiel in New England after his father's return to England, it is probable that Ezekiel returned with him to England and married Martha and had daughter Anne there.

Is Ezekial your ancestor? Please don't go away!

ask our community of genealogists a question.
Sponsored Search by Ancestry.com
DNA
No known carriers of Ezekial's ancestors' DNA have taken a DNA test. 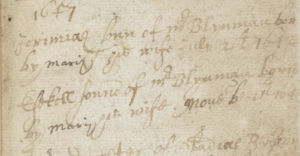