The Blott family mIgrated from England to Charlestown, Massachusetts, by 1634. Daughter, Mary arrived in the year 1632, where she was the 63rd person admitted to the Church at Roxbury. "Mary Blott a maide servant. she came in the yeare 1632 & was after married to Steward Woodfrod of this church, who after removed to Conecticott to Hartford church, where lived in christian sort."[3]

Mary married before 1636 Thomas Woodford. (Steward was his occupation)[1]

They went to Hartford and then Northampton, Massachusetts.[2] 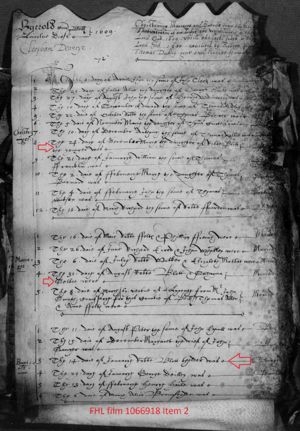 Cheryl (Aldrich) Skordahl
Direct quote from GMB needs to be summarized - put into your own words.

What is written is all that GMB says about Mary Blott.

Gillian Thomas
Blott-53 and Blott-1 appear to represent the same person because: They have the same date of birth and same son.
posted Apr 20, 2017 by Gillian Thomas