Elizabeth Blount, better known as "Bessie," was a mistress of Henry VIII and mother of his illegitimate son, Henry FitzRoy, Duke of Richmond and Somerset.

Blount's relationship with Henry VIII lasted for some length of time, compared to his other affairs, which were generally short-lived and unacknowledged. On 15 June 1519, Blount bore the King an illegitimate son who was named Henry FitzRoy, later created Duke of Richmond and Somerset and Earl of Nottingham. He was the only illegitimate son of Henry VIII whom the King acknowledged as his own.[6] After the child's birth, the affair ended for unknown reasons. For proving that King Henry was capable of fathering healthy sons, Elizabeth Blount prompted a popular saying, "Bless 'ee, Bessie Blount", often heard during and after this period.

From her 2nd marriage to Edward Clinton, 1st Earl of Lincoln

Sponsored Search by Ancestry.com
DNA
No known carriers of Bessie's DNA have taken a DNA test. 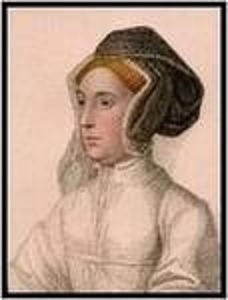 Leave a message for others who see this profile.
There are no comments yet.
Login to post a comment.
Kirk Hess
Blount-317 and Blount-13 appear to represent the same person because: Dup of Baroness Clinton; premerged. Everything in -317 is wrong.
posted Jan 07, 2019 by Kirk Hess
Linda Kendrick
My 15th GrGrandmother!
posted Nov 20, 2016 by Linda Kendrick

John Akard III
Elizabeth was married to Gilbert Tailboys and Edward de Clinton but was not MARRIED to Henry VIII. The Nickname box should contain Baroness Clinton, Dowager Baroness Tailboys and Mistress of Henry VIII, not Bessie
posted May 12, 2015 by John Akard III
edited Nov 10, 2021 by John Akard III
Dianne Hood
Elizabeth's nickname was Bessie, and it was as Bessie that she was best known in life. Countess of Lincoln is a title. Baroness Tailboys, dowager or otherwise, is a title. Mistress of Henry VIII is a statement of fact. These things do not belong in the nickname field.
posted Sep 13, 2021 by Dianne Hood