Sir Christopher Blount was a member of the aristocracy in England.

Christopher Blount is now said to have been son of Thomas Blount of Kidderminster and his wife, Margery Poley. [1][2] By his father's will dated 28 November 1568 Christopher inherited £10 a year out of Dovehouse Fields at Halesowen in Shropshire and some right to leases at Wedgnock and Fernhill in Warwickshire. [3] Because of his father's early death his mother had charge of his upbringing and she was firmly Roman Catholic by faith.

As his father had served John Dudley, Duke of Northumberland so Christopher served his son: by 1584 he was Gentleman of the Horse to Robert Dudley, Earl of Leicester.

With others including Charles Danvers he was knighted, in the Low Countries by Peregrine Bertie, Lord Willoughby in 1588. [4]Leicester died on the 4th of September [5]and within months Christopher had married his widow, Lettice Knollys, daughter of Francis Knollys and his wife, Catherine Carey and first cousin once removed of Queen Elizabeth whom she so much resembled. Very much out of favour since her marriage to Leicester Lettice hadn't made things any better by delighting in being taken for the Queen when she was away from court.

By her first husband, Walter Devereux, Lettice was mother of the rising favourite, Robert Devereux, Earl of Essex. It was Christopher's relationship to Essex that enabled his return as senior Member of Parliament for Staffordshire in 1593 with Sir Walter Harcourt, the other previous incumbent, Thomas Gerard, having decided it was better to seek return elsewhere.[6] The election of 1597 was a totally different affair. Christopher and another Essex follower, Sir Edward Littleton, were proposed by the earl but as it turned out Littleton's enemy, John Dudley, was returned as senior member for Staffordshire with Christopher having to settle for second place much to Lettice's disgust. [6]

In 1599 the Queen sent Essex to Ireland with orders to defeat the Irish chieftains led by Hugh O'Neill, Earl of Tyrone, a task that proved impossible. Essex made terms instead and Elizabeth, enraged, ordered him to remain in Ireland. Thinking to talk her round Essex sailed for England and was imprisoned for his pains. He was eventually released but, deprived of influence and income, he came eventually to decide on rebellion.[5]

On 8 February 1601 Essex led his following of malcontents onto the streets of London with the intention of securing an audience with the Queen; Christopher was among them. He was severely wounded attempting to force a barrier put up by Sir John Leveson at Ludgate Hill. He was still suffering from his wound at his trial at Westminster Hall on the 5th March and was executed at Tower Hill on the 18th [7]

Christopher Blount was previously believed to have been son of James Blount, 6th Baron Mountjoy. [8][9][10]

ask our community of genealogists a question.
Sponsored Search by Ancestry.com
DNA
No known carriers of Christopher's ancestors' DNA have taken a DNA test. 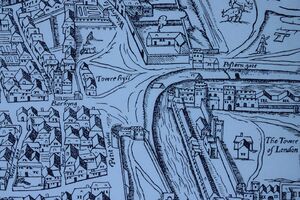 Leave a message for others who see this profile.
There are no comments yet.
Login to post a comment.
Simone Cody
I added the Alumni of Oxford reference for Sir Christopher Blount. It also has him as the third son of James Blount, Lord Mountjoy. I am working on the Blounts of Kidderminster so I'll post anything relevant that I find.
posted May 29, 2019 by Simone Cody

John Atkinson
Lennox-9 and Blount-14 do not represent the same person because: I think there has been a mistake, they are clearly not the same people based on name, birth and death dates etc.
posted Jul 06, 2018 by John Atkinson