Emma was born about 1871. She is the daughter of Charles Blowsnake and Lucy Goodvillage.

Her Hocąk clan name was given as ChakShipEWinKah (van Schaick), which is for Caxšebᵋwiga, "Eagle Woman", from caxšep, "Eagle"; -wį-, a feminine gender infix; -ga, a definite article suffix used in personal names. This is a Thunderbird Clan name.

She was briefly married to a Mr. Batiste (source: van Schaick), then to Mr. Goodbear, after which she had married an older man named "Walking Priest" who was born in 1854, and lived on the reservation in Nebraska. She appears to have separated from him and remained in Wisconsin. (1919 census) She was later married to Messrs. Littlejohn and Mike. (van Schaick)

ask our community of genealogists a question.
Sponsored Search by Ancestry.com
DNA
No known carriers of Emma's ancestors' DNA have taken a DNA test. 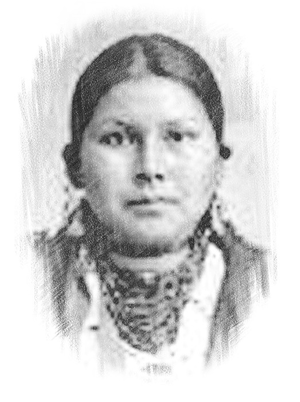