He was of English, Dutch, as well as German, distant French, and remote Belgian (Walloon) and Welsh, ancestry. His surname was of Dutch origin. On both sides, his family had lived in the U.S. since the 1600's.

Bogie won the best actor Academy Award for The African Queen (1951) and was nominated for Casablanca (1942) and as "Captain Queeg" in The Caine Mutiny (1954), a film made when he was already seriously ill.

Bogie became a father for the first time at age 49 when Lauren Bacall gave birth to their son Stephen Humphrey Bogart on January 6, 1949. Bogart and Bacall’s son, Stephen, was named after Bogart’s character in "To Have and Have Not".

Humphrey Bogart was born in New York on December 25, 1899 to Dr. Belmont DeForest Bogart and Maud Humphrey. His father was a respected and socially prominent heart surgeon and his mother was an accomplished painter, magazine illustrator and artistic director of "The Delineator", a women's fashion magazine. One of her drawings of Humphrey Bogart as a baby was used in a national advertising campaign for Mellin's baby food and briefly turned the infant Bogart into a national sensation.

The family owned a summer retreat on Canandaigua Lake, where Humphrey spent his happiest days as a child. He played chess and sailed on the lake, both of which would become lifelong hobbies. Although he was not known as a good athlete in school and he was not an avid golfer, Bogart was an accomplished golfer.

He became an outstanding chess player. He would later play chess with military personnel by mail. At that time, many stores had a professional chess player who could be challenged by anyone. He would go from store to store and challenge the pros. He is said to have won almost every game. The challenger would pay 50 cents to play. If he won, he got would get a $1.00. Many store managers and pros wanted Bogie to turn pro, but he declined. He was making more money as a non-pro. Eventually he did turn pro and was said to have beaten 40 or more people a day. (Source: Paul Harvey, Jr.'s, "The Rest of the Story.").

In the film Key Largo (1948), Bogie pays homage to his passion for sailing. The boat he sails in the movie is called the Santana. In real life, Santana was the name of Bogie's personal yacht.

Although he rarely participated in celebrity tournaments, Bogart was one of Hollywood’s better golfers. On many occasions, Bogart enjoyed a quick round of golf at Lakeside Golf Club in between filming at the nearby Warner Bros. studios.

The Bogarts sent their son to the Trinity School in New York and then to the prestigious prep school Phillips Academy, in Andover, Massachusetts. They hoped he would go on to Yale University and become a medical doctor like his father. In May of 1918, Bogart was expelled from Phillips Academy, apparently for smoking, his erratic study habits, his low grades and intemperate personality, especially authority figures. The Bogarts had hoped that Bogie would further his education at Yale in pursuit of becoming a medical doctor like his father. However, he failed to meet the school's high standards and was expelled.

After being expelled from Phillips Academy, Bogart enlisted in the United States Naval Reserve. In 1918, he was called to active service which was mostly routine, other than receiving a prominent scar that reportedly came from when he was given the task to escort a prisoner, who apparently slipped out of his grasp long enough to deck him. It is not known if this is how Bogie got the prominent scar on his lip as there is a conflicting tale of how that occurred. But, this made for the best story.

Bogart was honorably discharged from the Navy in 1919 and began to search for a career that would interest him.

Bogart's father was friends with Broadway and film producer William A. Brady and the families lived near each other in New York City. It was through Brady and his daughter, the stage actress Alice Brady, that Bogart got his first acting job on Broadway. Bogart was given a job as the company manger of a touring production of "The Ruined Lady". He even worked for awhile as a manager of William A. Brady's film studio, World Films.

Bogart began his acting career on the Brooklyn stage in 1921, playing a Japanese waiter or butler in a production of "Drifiting". He only had one line which he spoke using a reportedly poor Japanese accent. His father saw the show for the first time, and while Humphrey's role was quite small, his father was proud of his son's first bit of success.

He had never taken acting lessons, and had no formal training. Early reviewers of Bogart's acting skills kindly called them "inadequate". Bogart loathed the trivial roles he had to play early in his career. Bogart was in a total of 21 Broadway productions between 1922 and 1935. He called them "White Pants Willie" roles although it is not known what that meant. It may have been a reference to the Disney character, Steamboat Willie, who premiered in 1928. After all, Bogie was a naval seaman and a lifelong sailing enthusiast.

For more than a dozen years he struggled with small roles on the stage while trying to make it big in Hollywood. It was during this time that he married his first wife. Humphrey and actress Helen Menken were married on May 20, 1926 and divorced within a year. On April 13, 1928 he married again to actress Mary Philips.

He was able to land some parts in a few movies, but didn't get a break until 1934. He played an escaped killer in the play "The Petrified Forest". His portrayal was so convincing that the audience reportedly let out a gasp of horror the first time he walked on stage. This led to a film of the same play, where he became the go-to performer for criminals and gangsters over the next several years. Unfortunately, his newfound success was difficult on his married life, and he and Mary divorced around 1938. In that same year, he remarried to Mayo Methot.

However, being typecast as a villain was limiting to his career, and he sought a way out. He found it with the role of Sam Spade in The Maltese Falcon. This movie turned out to provide him with a new boost to his career, which propelled him into the leading role in Casablanca. Casablanca won three Academy Awards (Best Picture, Best Screenplay, Best Director) and is now ranked among the greatest films of all time. Two one of the most quotable films of all time come from Casablanca. The character "Rick Blaine's" uttering of "Here's looking at you, kid" and the ending quote of the unforgettable words, spoken by Bogart, "I think this is the beginning of a beautiful friendship."

As his career took off and he became one of Hollywood's most popular actors, his marriage to Mayo continued to deteriorate. They had a reputation throughout Hollywood as fiery and by 1945, it was over. But two weeks after his divorce, he married Betty Perske a/k/a Lauren Bacall and they would remain together until his death. They had two children together, a son Stephen (1949) and a daughter Leslie (1952).

Almost all of the roles that made him a star were obtained at the expense of George Raft. Raft turned down several roles starting with High Sierra (1941), in which Bogie first became a viable box office draw. Raft's poor choices not to take some truly great roles in parts later going to Bogart continued through his role as "Rick Blaine" in Casablanca (1942), which made him a truly international star.

Bogart continued on to a long and distinguished Hollywood career that included over 80 films. His most celebrated performance after "Casablanca" came in the 1951 film "The African Queen", in which he co-starred with Katharine Hepburn and for which he won his first and only Academy Award for Best Actor. His most notable later films included "The Caine Mutiny" (1954), "Sabrina" (1954) and "The Harder They Fall" (1956).

Bogie and Bacall purchased a $160,000 white brick mansion in Holmby Hills, an exclusive neighborhood between Beverly Hills and Bel Air. Bogart and Bacall had two Jaguar cars, three blooded boxer dogs together with an assortment of chickens and other animals.

Bogie and Bacall then loosely organized a group of actors and friends that enjoyed drinking heavily in Hollywood. They referred to themselves as "The Holmby Hills Rat Pack". The Rat Pack name originated one morning, after a night of heavy boozing, when Bogart's wife Lauren Bacall came upon the sodden group and flatly stated, "You look like a God-damned rat pack." Bogart enjoyed the term, and a legend was born.

Bogart's friend, journalist Joe Hyams, wrote an authorized biography, "Bogie: The Definitive Biography of Humphrey Bogart" with an introduction by Lauren Bacall published by the New American Library in 1966.

Bogie was known for his cigarette smoking both on and off the set. His preferred brand was unfiltered Chesterfield cigarettes of which he regularly smoked two packs a day. He became seriously ill in 1954 while he was filming The Caine Mutiny.

In 1956, while still in the prime of his career, Bogart was diagnosed with esophageal cancer. Bogart underwent a nine-and-a-half hour operation therefor on 1 March 1956, The surgery failed to remove all of the cancerous growth.

Bogart still smoked after the surgery. Thereafter, he began smoking filtered cigarettes for the first time in his life.

He battled his cancer until he died in his sleep at his Hollywood home on 14 January 1957. He weighed only 80 pounds and had just turned 57 years old.

ask our community of genealogists a question.
Sponsored Search by Ancestry.com
DNA
No known carriers of Humphrey's ancestors' DNA have taken a DNA test. 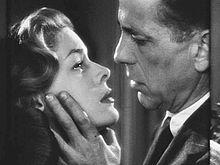 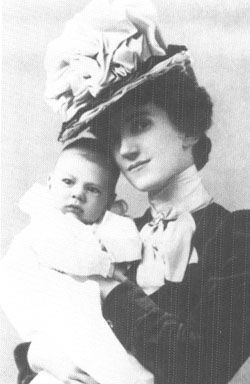 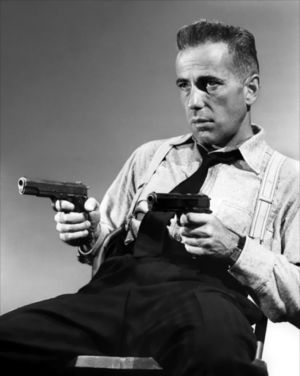 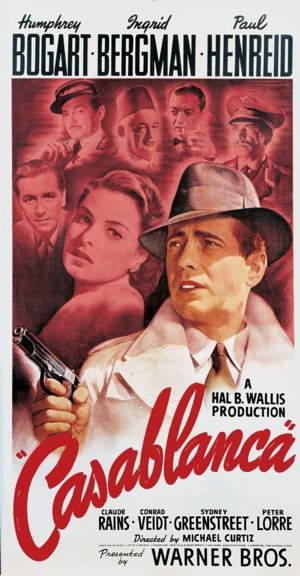 Maggie N.
Hi Michelle, great profile ! We would love to clean-up and add to the Biography if that's okay with you .

Humphrey is 18 degrees from Jaki Erdoes, 17 degrees from Wallis Windsor and 16 degrees from Henry VIII of England on our single family tree. Login to find your connection.