Henry (Bohun) de Bohun is a member of the House of Bohun.
Henry de Bohun, 5th Earl of Hereford[1]

"Henry (c. 1175–1220) was the son of Humphrey de Bohun (d. 1181) and Margaret (d. 1201), daughter of Henry, earl of Northumberland, and widow of Conan IV, duke of Brittany. His grandmother was Margaret de Bohun, the daughter of Miles of Gloucester, earl of Hereford, one of the earliest and most consistent supporters of the Empress Matilda in the civil war of King Stephen's reign. Margaret brought to the de Bohuns her family's claims to the royal constableship and to the earldom of Hereford. The constable's office had been granted to her son – Henry's father – by 1174 and was therefore inherited by Henry himself, who used the style 'Henry the Constable' in a number of his early charters. Despite his youth he occasionally attested charters of Richard I and was one of the king's sureties in negotiations with the count of Flanders in 1197."[4]

They had two sons, "Humphrey, Knt. [Earl of Hereford and Essex] and possibly Henry."[2] (See also below.)

Henry was Constable of England through the hereditary right to the office from his great-grandfather Miles of Gloucester.[5]

The male line of Miles of Gloucester having failed, on the accession of King John of England, Bohun was created Earl of Hereford and Constable of England (1199).[8]

"John bestowed the title earl of Hereford on Henry in 1200, though at the same time prohibiting him from staking any claim to the generous grants which Henry II had made in a charter to his ancestor Earl Roger of Hereford. His grandmother's keen advocacy had been a factor in this success, but equally significant was the fact that his mother was a granddaughter of David I, king of Scotland, and his uncle was William the Lion, a later king of the same country."[4]

In 1200 he was sent with other nobles to summon his uncle, William the Lion of Scotland to appear at Lincoln to do homage to King John of England.[5]

"Between 1204 and 1211 Henry was engaged in a lengthy dispute to establish his claim to a part of his mother's dower lands, the valuable lordship of Ryhall in Rutland."[4]

"No sooner had this dispute been settled than he found himself dragged into yet further litigation, countering a claim by the king's half-brother, William Longespée, earl of Salisbury, to his lordship of Trowbridge (Wilts.) on the pretext of descent from an earlier owner, Edward of Salisbury. This immensely long drawn-out dispute was to lead to a sharp deterioration in his relations with King John."[4]

"Longespée initiated the legal action in 1212, and Earl Henry responded by resort to the time-wasting tactics characteristic of the time, pleading illness as an excuse for absence from hearings. As such an excuse was inadmissible in this sort of case, the king took the lordship into his own hands, while allowing Longespée to levy scutage (money in lieu of military service) from its tenants."[4]

"In 1215 he joined the confederacy of the barons against the king, and his lands were seized by the king."[2]

"Henry de Bohun, Earl of Hereford, was a member of the Essex-based family grouping brought to the rebel cause by kinship with Geoffrey de Mandeville and Robert FitzWalter. Henry’s family also held important blocks of lands in the west of England and the Welsh Marches."[4]

Henry de Bohun was "one of the twenty-five barons elected to guarantee the observance of Magna Carta, signed by King John 15 June 1215. In consequence, he was among the barons excommunicated by Pope Innocent III 16 Dec. 1215.[2]

"The sense of hurt which Earl Henry felt was a major factor in his support for the rebels in 1215, as John's seizure of the lordship constituted a disseisin made 'unjustly and without judgement', in the wording used in clause 39 of the Charter. A further claim on his allegiance was made by the ties of kinship: his wife was Maud, daughter of Geoffrey FitzPeter and therefore sister of Geoffrey de Mandeville. By virtue of his involvement on the rebel side in 1215 he secured the restoration of the territorial lordship, although not of the castle, of Trowbridge. Letters ordering the estate's restitution to him were among the first to be issued in 1215 in execution of the Charter. The dispute continued to splutter on, however, and a final settlement was not reached until 1229, when Edward of Salisbury's estates were divided equally between the claimants, the castle and manor of Trowbridge itself going to the Countess Ela, Longespée's widow."[4]

1217 Battle of Lincoln and Prisoner

"After the death of King John, he adhered to the party of Louis of France, and his lands were again declared forfeited.[2]

"As part of the general settlement in September he made his peace with the Minority government, subsequently attending the young Henry III's court, receiving the earl's third penny of Herefordshire and accounting for scutage."[4]

"He died on pilgrimage to the Holy Land on 1 June 1220, leaving a son and heir, Humphrey. His widow took as her second husband, sometime between 1221 and 1226, one Sir Roger de Dauntsey and succeeded in her own right to the earldom of Essex, which on her death was inherited by her son."[4]

"Earl Henry was buried in the chapter house of Llanthony priory, near Gloucester, the traditional burial place of the Bohun family. He was succeeded in the title by his son, Humphrey, who was to live until 1275."[4]

Henry de Bohun, 5th Earl of Hereford, went on a crusade to the Holy Land in 1219, where he died June 1, 1220. He was buried with his son, Henry, in the chapter house of Llanthony Priory outside Gloucester.[2]

"Earl Henry was a notable figure in the development of modern Trowbridge, as it was he who in 1200 secured from King John the grant of a market and annual fair from the Crown in 1200. From this privilege flowed the laying out of the market place along the curved line of the castle ditch, the removal of the church from the castle's inner bailey and the construction of the present church of St James in the heart of the town. It is likely that the earl's considerable investment in Trowbridge helps to explain his keenness to retain possession of the place in the face of William Longespée's persistent claims."[4]

Cokayne's Complete Peerage and Richardson's Royal Ancestry have some points of discrepancy (such as born 1176 [CP] vs c1175 [RA]).[5][2] The general policy of the Magna Carta Project is to defer to Richardson in the absence of primary sources as the most recently published (2013) reliable source.[9] Publication of Complete Peerage began in the 1880s, with the publication of "revised and expanded" volumes from 1910 to 1959, and corrections continue to be suggested (for more details, see the Complete Peerage entry on the Pre-1500 Resource page). The Complete Peerage cited was the first edition.[5]

Henry de Bohun can be found in the online copy of Complete Peerage (posted by archive.org) on page 213.[10]

If significant differences are found in current corrections, please post a comment to the profile about them.[11]

Lacking reliable sources, the profiles for the following were detached as children of Henry de Bohun and his wife:[2]

Click the Changes tab to see edits. Thank you to everyone who contributed to this profile.

As a surety baron, Henry de Bohun's profile has the Magna Carta Project as a manager. See Bohun-7 Descendants for profiles of his descendants that have been improved and categorized by the Magna Carta Project and are in a project-approved trail to a Gateway Ancestor. See this index for links to other surety barons and category pages for their descendants. See the project's Base Camp for more information about Magna Carta trails. ~ Noland-165 17:30, 30 January 2019 (UTC)

This profile was edited by Jack Day in 2015. It was re-reviewed by Gordon Warder Jr in January 2019 and July 2019 by Liz Shifflett.

Sponsored Search by Ancestry.com
DNA
No known carriers of Henry's DNA have taken a DNA test. 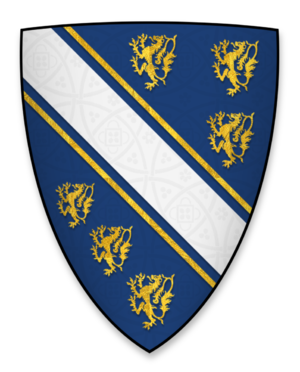 I think the profiles for both Ralph & Grace need to be detached. Ralph is sourced to Wikipedia, which does not give a source citation for him. Grace is sourced to Richardson, but to the 1st edition of Magna Carta Ancestry & she is not in the 2nd edition. Neither Ralph nor Grace is listed as a child in Richardson's Royal Ancestry (volume I, pp 406-407 BOHUN 5).

Tina Cox
I have him in my ancestry, I will have to check and see who the links are as his descendants. I dont recall them off the top of my head.
posted Apr 19, 2021 by Tina Cox

Michael Cayley
These two previously-shown children were detached in 2019. No good sourcing was found for either of them being children of Henry de Bohun, and the position is explained in the research notes on this profile. We would need firm and reliable sourcing to think about adding them back.
posted Apr 19, 2021 by Michael Cayley

Liz (Noland) Shifflett
I've had just one response to my last question, which disagreed with my proposal and suggested that I leave it alone. Since I'm not clear on the correct answer, I'll do that (looking at Complete Peerage, I can't decipher how the number of creations is determined, but the entry for Henry begins with "VI", which does not seem to be one of the choices discussed in the comments or his profile).
posted Mar 05, 2019 by Liz (Noland) Shifflett

Please note the edit warning at top of biography. Looking at ensuring parent/child & b/d/m dates are appropriately sourced, I discovered Wikipedia text cited to Richardson's Royal Ancestry. RA is reliable; the Wikipedia article has proven not to be (i.e., birth year different than other sources; son Ralph given with no source & not mentioned by a reliable source).

They had two sons, Humphrey, Knt. and possibly Henry.