Simón José Antonio de la Santísima Trinidad Bolívar y Palacios Ponte y Blanco, commonly known as Simón Bolívar, was a Venezuelan military and political leader. Bolívar played a key role in Latin America's successful struggle for independence from the Spanish Empire, and is today considered one of the most influential politicians in the history of the Americas.

Simón had a brother and two sisters. His parents were affluent, high born, natives of Caracas. Sadly, Simón's father died in 1786 and his mother in 1789.[2]

His guardian Carlos Palacios, saw that he obtained a good education and at the age of 14 or 15 he was sent to Spain to complete his education.[2]

In Madrid, he met Teresa daughter of Bernardo Rodriquez del Toro and Benita Alayza, but a marriage was postponed because of the couples young age. Simón was only 17, and Teresa was three years younger.[2][1] Simón subsequently spent a couple of years in Paris living in the Palais Royal, where at least one biographer implies that his main occupation was enjoying himself.[2]

In 1802, he returned to Madrid and married Teresa. The couple returned to Caracas, but their happiness was short-lived for Teresa died 22 January 1803, leaving no offspring.[2]

I loved my wife much, and at her death I took an oath never more to marry. ... If I had not been bereaved, perhaps my life would have been different;... The death of my wife placed me early in the road of politics, and caused me to follow the chariot of Mars instead of the plow of Ceres.

In 1804, Bolívar returned to Europe, where he read and studied and further honed his own philosophy. A German scientist, Alexander von Humboldt, told him that he believed the Spanish colonies were ripe for independence. The idea became rooted in his mind and on the heights of Monte Sacro, in Rome, Bolívar vowed to liberate his country.[3]

Bolívar, returned to Venezuela in 1807 and the Latin American independence movement began the next year. The Spanish governor was removed from office. A junta (a committee or administrative council) took over. Bolívar was sent to London to gain recognition and aid for the new government. He failed in this but persuaded, Francisco de Miranda to return to Caracas and take command of the independence movement. Francisco had made and earlier attempt to liberate his country. The country declared it’s independence July 5, 1811, and Bolívar entered the army of the new republic. One of his officers, in a treasonable action opened the fortress of Puerto Cabello to the Spanish army. Control was lost and an armistice was signed July 1812, leaving the country back in the hands of Spain. Bolívar and others prevented the escape of Miranda, who then spent the rest of his life in Spanish dungeons.[3]

Bolívar was determined to continue the effort. He traveled to New Granada, and with the aid of New Granada led a force to retake Venezuela. After six hard-fought battles he entered Caracas on Aug 6, 1813. He was given the title of Liberator and became the political dictator of Venezuela. A civil war broke out. The Spanish once again defeated Bolívar, who fled to New Granada. There he was commissioned to and succeeded in removing a separatist faction from Bogotá (now in Colombia). An attempt to lay siege to Cartagena failed and once again Bolívar fled, this time to Jamaica.[3]

Three years of defeats and victories followed. Bolívar designed an incredibly daring move to attack the Viceroyalty of New Granada. The Spaniards were surprised because Bolívar’s army approached from the Andes Mountains, where no one expected them to be) after a seven day march. This bold action was the turning point in South America’s history.[3]

A new republic was formed Gran Colombia (now the countries of Colombia, Panama, Venezuela and Ecuador.[3]

June 1821 The Battle of Carabobo opened the gates of Caracas. Venezuela was free.[3]

May 1822, Bolívar won a victory that freed Ecuador from the Spanish.[3]

During his time in Ecuador, he met Manuela Sáenz, who became his mistress. She was an ardent revolutionary. She saved him from conspirators in 1828, and after his death she was exiled from Bogotá, and died during a diptheria epidemic in Peru in 1856.[4]

1824 Liberation of Peru, through the actions and direction of Bolívar[3]

1825 Upper Peru fell to the liberating army. The new country of Bolivia was formed.[3]

Bolívar had plans to unite South America, but the individual countries even within Gran Columbia began to oppose each other. After several years of disruption Venezuela seceded from Gran Colombia.[3]

For more details on the life of Simón Bolívar, see any of the sources listed below.

The country of Bolivia is named in Bolivar's honor, as is Bolivar County, Mississippi and numerous other events, monuments and places.

Is Simón your ancestor? Please don't go away!

ask our community of genealogists a question.
Sponsored Search by Ancestry.com
DNA
No known carriers of Simón's ancestors' DNA have taken a DNA test. 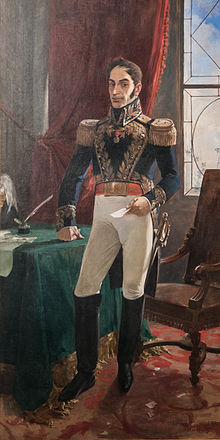 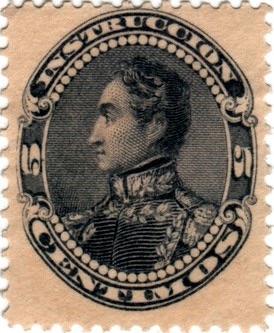 Anne B
Would you like to contribute to the Collaborative Improvement of the Profile?
posted Feb 08, 2016 by Anne B