Mother of Elizabeth Tudor and Unnamed Infant Tudor
Died 19 May 1536 at about age 35 in Tower of London, London, England

Anne Boleyn (/æ:n bʊlən/*) was born about 1501 at Blickling Hall in Blickling, Norfolk, England. She was the second child and daughter of Thomas Boleyn KG KB and Elizabeth Howard. She spent her early years between Blickling Hall and Hever Castle, in Hever, Kent. Her father inherited them from his father when she was very young.[1][2][3]

In 1513, Anne was sent to France and trained in the skills as a lady of the court by Margaret of Austria. She became fluent in French and impressed Margaret with her intelligence. In August of 1513, Anne was with her sister in France when Mary Boleyn served as fille d'honneur to Mary Tudor, Queen of France, when she married King Louis XII of France. When King Louis XII died in 1515 she joined the household of Queen Claude of France the queen of King François I.[3][4][5]

By 1522, Sir Thomas, Anne's father requested that she be returned to England after the death of Queen Claude. Henry's sister Mary (Tudor) Brandon the Duchess of Suffolk appointed Anne to the household of Queen Catherine. Shortly after arriving in England, Anne became one of the Queen's ladies. That year, she attended and participated in one of the revels at the court of Henry VIII.[6]

Life with a King

It was around this time that the King began to take an interest in Anne. Thus began a struggle for the King to win Anne's affections. She aspired to become more than just another mistress and refused him. With her vibrancy and intelligence, she would woo Henry and then push him away. This continued for several years until Henry realized his only recourse was to marry Anne. His battle to obtain an annulment from Catherine had already begun.[7][8]

There were many letters exchanged between Anne and Henry. A year after Henry became enamored with Anne he wrote a letter to her:

" In turning over the contents of your last letter, I have put myself in great agony, not knowing how to interpret them, whether to my disadvantage, as you show in some places, or to my advantage, as I understand them in some others, beseeching you to earnestly let me know expressly your whole mind as to the love between us two. It is absolutely necessary for me to obtain this answer, having been for above a whole year stricken with the dart of love, and not yet sure whether I shall fail in finding a place in your heart and affection, which last point has prevented me for some time past from calling you my mistress; because, if you only love me with an ordinary love, that name is not suitable for you, because it denotes a singular love, which is far from common. But if you please to do the office of a true loyal mistress and friend, and give up yourself body and heart to me, who will be, and have been, your most loyal servant, (if your rigour does not forbid me) I promise that not only shall the name be given you, but I will take you for my only mistress, casting off all others besides you out of my thoughts and affections, and serve only you. .......... H R "[9]

On 1 September 1532, she was, created Marchioness of Pembroke.[10]. Anne first secretly married Henry on 25 January 1533/4. Anne became pregnant and the Archbishop Of Canterbury Thomas Cranmer approved the annulment of Henry and Catherine's marriage.[11][12][13] [14] On 19 May 1533, Henry publicly declared his marriage to Anne. He made Greenwich Palace, her home, and a great celebration took place.[15]

A Princess is Born

On 7 September 1533, their first child Princess Elizabeth was born at the Palace of Placentia. Elizabeth's birth was celebrated in full royal regalia. However, Henry wanted a male heir, which was a concern for Anne. Elizabeth was the only child that Anne gave birth to that did not die as an infant.[15][16]

The christening of the Princess was a grand affair. It took place at Greenwich Palace, and Dukes and Duchesses and many others were summoned to attend. The palace was decorated in true royal fashion. The Archbishop of Canterbury was Godfather and christened the baby girl.[16]

Jane Seymour had been appointed one of Anne's ladies, and the King took an interest in her. His dissatisfaction after three years of Anne not being able to produce a living male heir had grown. In April of 1536, Henry was admitting he had grown weary of Anne.[17]

She was accused of beguiling several men, committing adultery and incest, with her own brother George Boleyn, Lord Rochford. Anne along with these gentlemen were all convicted of adultery and plotting to kill the King. One of the men accused, Mark Smeaton initially denied the accusations, but eventually confessed and threw himself at the mercy of the King. Some of the other men accused were Sir Francis Weston, Henry Noreys, and, William Bryerton, they all pled not guilty but, all were convicted. A few days later, Anne and her brother George declared their innocence of the accusations.

" Your Grace's displeasure and my imprisonment are things so strange unto me as what to write or what to excuse I am altogether ignorant. Whereas you sent unto me, willing me to confess a truth and so to obtain your favour, by such an one whom you know to be my ancient professed enemy, I no sooner received this message by him than I rightly conceived your meaning; and if, as you say, confessing a truth indeed may procure my safety, I shall with all willingness and duty perform your command." But do not imagine that your poor wife will ever confess a fault which she never even imagined. Never had prince a more dutiful wife than you have in Anne Boleyn, "with which name and place I could willingly have contented myself if God and your Grace's pleasure had so been pleased." Nor did I ever so far forget myself in my exaltation but that I always looked for such an alteration as now; my preferment being only grounded on your Grace's fancy. You chose me from a low estate, and I beg you not to let an unworthy stain of disloyalty blot me and the infant Princess your daughter... "

They too were convicted and condemned to execution. The men were beheaded before the Tower.[18][19] [20]

Anne was interred at St Peter ad Vincula at the Tower.[24] In 1976, there was a request to have Anne re-interred at Lambeth in London.[25]

Sponsored Search by Ancestry.com
DNA
No known carriers of Anne's DNA have taken a DNA test. 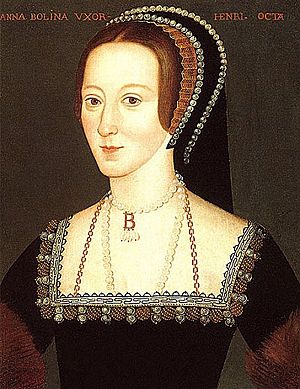 Jack Day
Looking at the dates in the data field, did Anne stop being Henry's wife two days before her death?
posted Jul 21, 2016 by Jack Day

Jo Fitz-Henry
The marriage was declared null and void two days before the execution. - I've added the reference from the State papers.
posted Feb 14, 2021 by Jo Fitz-Henry