In 1514 when Mary was about 15, she was sent to France, to accompany Mary Tudor as one of her Maids of Honour when the princess went to marry King Louis VII of France. Several of the attendants were sent back to England after the wedding. The French King chose to keep Mary at the French court as one of the new Queens attendants. Life in the French court was very different, and their morals were much looser than life in the English court. Mary became one of the King's mistresses. This did not please her father, who had higher aspirations for his daughters.[6][7][8]

By 1519, Mary had returned to England. She married Sir William Carey on 4 February 1520/1, in the presence of the King Henry VIII. Their marriage was a useful alliance combining the bloodlines of the Beaufort, Bohun, Butler, and Howard's. Sir William was a Beaufort descendant through his mother.[4][9][10]

Mary became one of Queen Catherine's attendants. Sir William was rising as a gentleman of the Privy Council. Several grants were made to Sir William between 1522 and 1525. Mary had become the King's mistress. In 1523 the King named one of his ships the Mary Boleyn. Mary left the court after becoming pregnant in 1525. It is possible that her children Henry, and Catherine Carey were the illegitimate children of the King. Her son Henry was born on 4 March 1526. In 1528 the King requested a dispensation from Pope Clement VII so that he could marry Anne the younger sister of Mary. The King declared that he was related to her sister, Mary as she had been his mistress.[3][11][12][13] In 1535 John Hale the Vicar if Islesworth told the Council...[14]

"Moreover, Mr. Skydmore dyd show to me yongge Master Care,
saying that he was our suffren Lord the Kynge's son by our suffren Lady
the Qwyen's syster, whom the Qwyen's grace myght not suffer to be yn the Cowrte"

William Carey died of the, sweating sickness on 23 June 1528, leaving Mary a widow with two young children. Mary's sister, Anne was granted wardship of Mary's son Henry Carey. The King ordered Mary's father, Thomas to support her and ordered £100 annuity previously awarded to her late husband, William Carey to be awarded to her father for her support.[3][11][15][16]

In 1534, Mary fell in love with, and secretly married, a much younger William Stafford KB, a member of the Calais garrison. He was the 2nd son of a minor midland family. Mary married him without the King's consent or approval of her father. She quickly fell into disfavor and disgrace. Forbidden from appearing at the court, her sister Anne refused to see her, and her father cut off her allowance.[3][17]

Mary wrote several letters pleading for forgiveness for marrying for love, and without consent. She often requested that her husband be restored to his previous position, her pleas seem to have been ignored. In 1536, her sister Anne miscarried a son. She insisted that she would only allow Mary to take care of her. This was the only time Mary was allowed contact.[3]

Mary and William settled down and lived a life of obscurity. Mary did reconcile with her father who allowed them to live at Rochford Hall in Essex. Having been banished from court, kept Mary and William from being caught up in the downfall of her sister and brother. Mary was clear of any accusations when Anne and George Boleyn were executed in 1536.[3]

Mary died on 19 July 1543 at Rochford Hall in Essex. Mary's son Henry received the Butler inheritance. In her Will, she left William Stafford the manor of Abinger which, had been formerly held by Lady Mary Carew of Essex.[18][19][20] 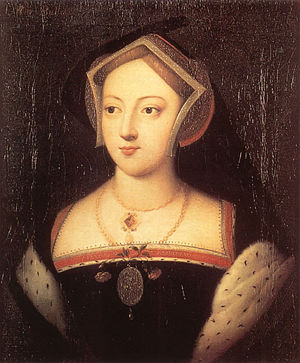 Leave a message for others who see this profile.
There are no comments yet.
Login to post a comment.
Michael Stafford
Wikipedia and many online sites have a death date of July 19, 1543. It looks like that has been moved forward here 11 days to account for the shift from the Julian to Gregorian calendar, which occurred in 1752.
posted Oct 18, 2021 by Michael Stafford

Laura DeSpain
Hi Trusted List members, I will soon begin working on this profile on behalf of the England Projects Managed Profiles team. I will be adding sources, editing, and expanding the biography. If you have any sources or, information please let me know.