George Boleyn was son of Thomas Boleyn and Elizabeth Howard, daughter of Thomas Howard, 2nd Duke of Norfolk and his first wife, Elizabeth Tilney.[1][2][3][4] There is no record on his birth (nor of his siblings), but it is thought to have been between 1504-1505 at the family home of Blickling Hall in Norfolk, England. The Boleyns moved to Hever Castle in Kent, England in about 1505-6, which raises the possibility that he could have been born in Kent.

In addition to his famous sisters, Mary and Queen Anne, George had two brothers, Thomas and Henry. They are thought to have been his older brothers. In a letter to Thomas Cromwell, Thomas Boleyn wrote that his wife "brought him a child" every year from the time of their marriage until the time of his father's death in 1505. [5][6] It was also traditional for first sons to be named after the king or their father at the time. Both brothers died in childhood. Thomas was buried in St. John the Baptist Churchyard in Penshurst, Kent, England, [7] and Henry was buried with his grandfather Thomas in St. Peter Churchyard in Hever, Kent, England.[8]

George was educated in England, and attended Oxford University.[9] He was raised to be a courtier. George attended the royal court of Henry VIII for the first time as a child during Christmas 1514. [10] He was appointed King Henry's page around 1516. George remained a page until January 1526/27. In an attempt to reform the royal household and gain contol of the Privy Chamber, Cardinal Wolsey decreased the number of men attending King Henry. George was one of the members dismissed. [11]

George married Jane Parker, daughter of Henry Parker, Lord Morley and Alice St. John of Bletsoe.[1][4][2] Jane was a lady-in-waiting to Queen Catherine (and subsequently Queen Anne). The marriage occurred prior to 1526 as there was a letter which mentioned a wife in January 1526.[11] There is no documention of the place of the wedding ceremony. George and Jane Boleyn are believed to have had no children.[1]

George was a poet and musician in King Henry's court. He was considered a contemporary of the of founders of English Renaissance poetry, Thomas Wyatt and Henry Howard, the Earl of Surrey. [12] George's poetry has not survived, although it is just possible that one famous poem generally ascribed to Thomas Wyatt, "The Lover Complaineth the Unkindness of His Love" is his: Anthony á Wood, in his 1691-2 Athenae Oxonienses, suggested this,[9] though Tottel's Miscellany, a poetry collection published in 1557, in which the poem first appeared in print, gives Wyatt as the author.[13]

My Lute awake, perform the last
Labour that thou and I shall waste,
And end that I have now begun!
And when this song is sung and rest,
My Lute be still, for I have done!

The rocks do not so cruelly
Repulse the waves continually,
As she my suit and affection:
So that I am past remedy;
Whereby my lute and I have done...

George was a regular compainion of King Henry VIII. Records showed he frequently won money betting with the King over archery, hunting, shovel board, dice, bowls and card games. [14]

George and Anne Boleyn were deeply Reformist and evangelical. He spoke passionately about his religious beliefs on the scaffold prior to his excecution. [15] George translated the religious texts Les Epistres and The Ecclesiaste from French to English for his sister. [16]

The letter to Anne prefacing the translation of The Ecclesiaste includes:

George started as a diplomat at about the age of 25 in October 1529. [3] He went on a total of six embassies between 1529 - 1535. George atttended his first trip to meet with King Francis I of France with the seasoned diplomat John Stokesley. They were to discuss the King's "great matter" (the annulment of his marriage to Catherine of Aragon). [17]
George's second embassy to France was in March 1532/33. He was to inform King Francis of King Henry's marriage to Anne Boleyn. [3] George was instructed to urge King Frances to write a letter of support to the Pope.[18]
His third trip to France was in the summer of 1533. He went with his uncle, the Duke of Norfolk. [3] Their mission was to dissuade King Francis from a scheduled meeting with the Pope. [19]
He returned to France twice in 1534 with Sir William Fitzwilliam to meet with Francis, and his sister Marguerite, the Queen of Navarre. Their mission was to urge Francis to abandon his alliance with the Pope, and to arrange for the meeting of the two kings and queens. [20][21]
His last trip to France was in June 1535.

George was a member of the "Reformation Parliament".[3][22]This Parliament sat from October 1529 to April 1536, and passed the major pieces of legislation leading to the break with Roman Catholic Chrurch, and establishment of the Church of England. George delivered a treatise at the Convocation of the Clergy. [23]

The Fall of the Boleyns

George and Anne were arrested on 2 May 1536 for acts of incest and high treason. Four other men, Sir Henry Norris, Sir Francess Weston, Sir William Brereton and Mark Smeaton were convicted of having an adulterous relationship with Queen Anne, and sentenced to death on 12 May 1536. All four pleaded not guilty to all the charges with the exception of Smeaton, who, as a commoner, was subjected to torture and pleaded guilty to one charge of adultery.

The brother, as I say, was charged with having had connexion with her; no proof of his guilt was produced except that of his having once passed many hours in her company, and other little follies. He answered so well that many who were present at the trial, and heard what he said, had no difficulty in waging two to one that he would be acquitted, the more so that no witnesses were called to give evidence against him or against her, as is customary in such cases, when the accused denies the charge brought against him.
-Eustace Chapuys [25]

"He made answer so prudently and wisely to all articles laid against him, that marvel it was to hear, but never would confess anything, but made himself as clear as though he had never offended”
-Charles Wriothesley [26]

"His calm behaviour, and good defence. More himself did not reply better. The judges at first were of different opinions, but at last one view overturned the other and they were unanimous." [27]

Despite his well presented defense, he was sentenced to death by his uncle, Sir Thomas Howard, 3rd Duke of Norfolk:

"That he should goe agayne to prison in the Tower from whence he came, and to be drawne from the saide Towre of London thorowe the Cittie of London to the place of execution called Tyburne, and there to be hanged, beinge alyve cutt downe, and then his members cutt of and his bowells taken owt of his bodie and brent before him, and then his head cutt of and his bodie to be divided in 4 or peeces, and his head and bodie to be sett at suche places as the King should assigne" [26]

King Henry commuted his sentence to beheading, and George was executed at Tower Hill on the 17th of May 1536.[1] [28] He was the first to die among the five men convicted.

Excerpt from George Boleyn’s speech on the scaffold:

“Christian men, I was born under the law, and I die under the law for as much as it is the law which has condemned me.Masters all, I have not come here to preach but to die for I have deserved to die if I had twenty lives, more shamefully that can be devised, for I am a wretched sinner, and I have sinned shamefully. I have known no man so evil, and to rehearse my sins openly, it were no pleasure to you to hear them,nor yet for me to rehearse them, for God knoweth all.Therefore, masters all, I pray you take heed by me, and especially my lords and gentlemen of the court, the which I have been among, take heed by me and beware of such a fall, and I pray to God the Father, the Son and the Holy Ghost three persons and one God,that my death may be an example unto you all. And beware, trust not in the vanity of the world,and especially in the flattering of the court. And I cry God mercy, and ask all the world forgiveness of God. And if I have offended any man that is here now,either in thought, word or deed, and if ye hear any such,I pray you heartily in my behalf,pray them to forgive me for God’s sake. And yet, my masters all, I have one thing for to say to you: Men do moon and say that I have been a setter forth of the Word of God, and one that have favored the Gospel of Christ; and because I would not that God’s word should be slandered by me, I say unto you all, that if I had followed God’s word in deed as I did read it and set it forth to my power, I had not come to this.If I had, I had been a living man among you. Therefore I pray you, masters all,for God’s sake stick to the truth and follow it, for one good follower is worth three readers, as God knoweth.” [29]

George’s body and head were taken to the Chapel of St Peter ad Vincula within the Tower, where his sister would join him two days later.

In his poem “In Mourning Wise Since Daily I Increase”, Thomas Wyatt wrote of George's execution:[30]

“As for them all I do not thus lament, But as of right my reason doth me bind; But as the most doth all their deaths repent, Even so do I by force of mourning mind. Some say, ‘Rochford, haddest thou been not so proud, For thy great wit each man would thee bemoan, Since as it is so, many cry aloud It is great loss that thou art dead and gone" 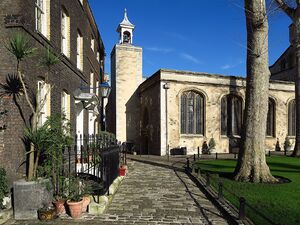 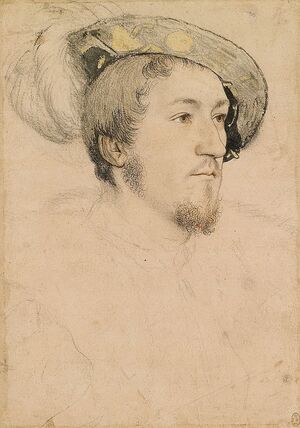 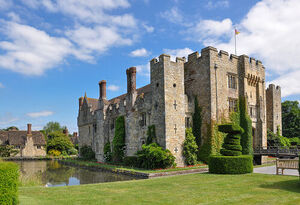 Crucifixion and arms of Anne Boleyn 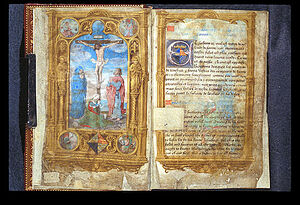 Ellen Altenburg M.D.
Hi, manager's I will soon begin working on this profile on behalf of the England Projects Managed Profiles team. I will be adding sources, editing, and expanding the biography. If you have any sources or, information please let me know.
posted May 02, 2021 by Ellen Altenburg M.D.

David Urquhart
I will be reinserting some bio headers, story to the bio and a source citation. According to Cokayne, the title Viscount Rochford was created for his father, and George was created Lord Rochford in 1530.
posted Dec 29, 2020 by David Urquhart

I am not quite sure how your DNA is picking up a cousin relationship, when most DNA only confidently traces back 5 generations. I would like to suggest that you read this post. https://genetics.thetech.org/ask-a-geneticist/how-far-back-can-ancestry-test-go

Sarah-Jane Champion de Crespigny
Mary Boleyn is my 13th great grand mother, sister of George. Thank you for this work you have done. Geni is also picking up a cousin relation to him as well as 14th great Uncle.

Categories: Prisoners of the Tower of London | People Executed by the Tudors | This Day In History May 17 | House of Boleyn | Blickling Hall, Blickling, Norfolk