John Bolling is a descendant of Pocahontas. Here is the trail.

John and Mary were ancestors of the controversial First Lady, Edith Bolling Wilson.

John Bolling possessed some of his father's dispositions: was like him, very large, and was six feet high. He delighted for the chase, and cared very little for the ladies, until he saw his lady. His character then as suddenly changed as that of Silvio in the Pastor Fido. After many sighs &c., he married Miss Jefferson, daughter of that Jefferson who, with Mr. Fry, made a map of Virginia.

But it seems he had already developed an attachment to the bottle.[3] Robertson attempts a whitewash.[4] But Thomas Jefferson wrote in 1798:[5]

The state of things at Chesnut Grove is truly distressing. Mr B.'s habitual intoxication will destroy himself, his fortune & family. Of all calamities this is the greatest. I wish my sister could bear his misconduct with more patience. It might lessen his attachment to the bottle, & at any rate would make her own time more tolerable.


Bolling, John, son of Col. John Bolling, of "Cobbs", lived first in Gloucester County from which he was a delegate in the House of Burgesses in 1766-1769. Afterwards, in 1778, he was a member of the House of Delegates from Chesterfield County. He married Mary, sister of Thomas Jefferson. He was born June 24, 1737, and died in 179-." 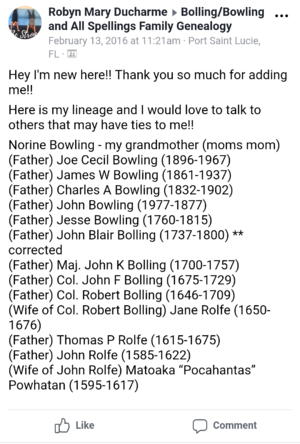 Leave a message for others who see this profile.
There are no comments yet.
Login to post a comment.
Sarah Sharpless
The will of John (no middle name) Bolling, naming sons Edward, John, Robert & Archibald was written on 7 Feb 1800, in Chesterfield Co., VA - if you wish to revise the death date.
posted Mar 14, 2019 by Sarah Sharpless

Steven Mix
Again, bios indicate they are the same, and they share a match for the same daughter who married Archer, and she will need to be merged as well.
posted Jun 18, 2018 by Steven Mix

Wesley Doughman
Bolling-755 and Bolling-1 are not ready to be merged because: These two may indeed be the same person, but year of death is different.

I will contact Bowling/Bolling all spelling family historians to see if these two were the same person.

Steven Mix
Bolling-755 and Bolling-1 appear to represent the same person because: The middle names differ, but the bio on the match says it is the same son, and they also share a match for the daughter who married Archer.

So this was clearly intended to be the same prominent man. Thanks!

Wesley Doughman
It is obvious last name is spelled incorrectly . Will work on merge now
posted Mar 15, 2017 by Wesley Doughman
Kerry Larson
Bolin-357 and Bolling-1 appear to represent the same person because: Same except middle name and spelling of last name.
posted Feb 28, 2017 by Kerry Larson
Anna Berkes
What is the source for John Bolling's middle name "Kennon"?
posted Mar 24, 2015 by Anna Berkes