John Bolling is a descendant of Pocahontas. Here is the trail.

John was a Virginia colonist.

John Bolling was born at Kippax Plantation, in Charles City Co., Virginia a site which is now within the corporate limits of the City of Hopewell. He made his home at the Bolling family plantation "Cobbs" just west of Point of Rocks on the north shore of the Appomattox River downstream from present-day Petersburg, Virginia. (Cobbs was located in Henrico County until the area south of the James River was subdivided to form Chesterfield County in 1749).

Bolling served in the Virginia House of Burgesses from 1710 until his death in 1729. In 1722, he opened a tobacco warehouse in what is now the 'Pocahontas' neighbourhood of Petersburg. William Byrd II of Westover Plantation is said to have remarked that Major Bolling enjoyed "all the profits of an immense trade with his countrymen, and of one still greater with the Indians."

He is commonly referred to as "Major" John, as distinct from his son "Colonel" John, but he may have attained the rank of Colonel, and is so described on his modern monument (erected long after his death).

He owned "Cobbs Plantation." married Mary Kennon (1679–1727), daughter of Richard Kennon and Elizabeth Worsham, on December 29, 1697 in St. John's Church, Richmond, Virginia.[3] They had at least six children, whose names appear in John Bolling's will:[1]

Penelope (circa 1700-1776), married Captain Christopher Clark, and had a son Bolling Clark, two grandsons Bolling Clark, a grandson Bolling Clark Anthony, and several other descendants named "Bolling," "John Bolling," or, indeed, "Rolfe Bolling."
Penelope may alternatively have been the daughter of Edward, the son of Arthur Johnston, and Elizabeth Walker. Indeed, this is the more likely of the two possible origins of Penelope, as a birth record of daughter Penelope has survived. In this case, the various descendants of Penelope named Bolling would have been named in honor of a member or members of the Bolling family.

His will (dated April 29th 1727, proved in Henrico County Oct 1729) mentions his wife Mary, his son John, his daughter Mary and her husband Mr John Fleming, his daughter Elizabeth Bolling, his daughters Martha and Ann, and his grandson Richard Randolph.

"I happened on a large stone marker and above-ground crypt surrounded by a stone wall. It is by itself on a rural property near the Appomattox River here in Virginia. It is for "Colonel Jno. Bolling of Cobbs" who died in 1729. The marker is in good condition, though somewhat darkened. In addition to the usual gravestone information, it has a rather lengthy inscription in a script style that I was unable to read from the other side of the protective stone wall. I am not an expert on 18th Century burials but this grave site strikes me as unusual. The above-ground stone crypt is somewhat larger than a coffin. The grave site is on a hilltop high above the Appomattox with no apparent water table problems. It has a great view of the river (and I-295). The protective stone wall appears to be the same vintage as the rest of the site."
"This is in Chesterfield County in a small residential area on Cobb's Point, near Point of Rocks and west of Hopewell. It is just north of the Appomattox and a short distance west of I-295. I am quite sure this would have been on his own land. Some distance away near someone's front yard and facing Enon Church Road there is a small historical marker stating this was the site of Cobb Hall owned by Colonel Bolling, a great grandson of Pocahontas."

Mark Fisher, a resident of Williamsburg, Virginia provided some information for this memorial. He gathered info from various libraries including the Library of Congress, the Library of Virginia, the Richmond Library and the College of William and Mary as well as the Virginia Historical Society.

Inscription:
Around this stone lie the remains of
COL. JNO. BOLLING OF COBBS
Great-grand-son of
ROLFE AND POCHAHONTAS
B. 1676 ----D. 1729

He was prominent in his day. Represented his County (Chesterfield) in the House of Burgesses and was long Lieutenant an office of great dignity and importance. Being the only great-grand-child of Pocahontas he was the ancestor of all who derive their lineage from her.

Also, lie here unmarked the remains of a large number of her descendants whose tomb--save one--that of Elizabeth eldest grand-daughter were destroyed during the occupancy of Cobbs by the Federal troops in 1864. Among those buried here were:

WILLIAM ROBERTSON
B. 1750----D. 1829
Member of Council of State
His wife
ELIZABETH BOLLING
And their youngest son
WYNDHAM ROBERTSON
B. 1803----D. 1888
Sometime Governor of Virginia.
And by whose direction this monument is erected. [7]

John Bolling brought my ancestor, Richard Dean(e) from Cripplegate Ward Hospital/Orphanage, London, England, to Henrico Co., VA, in 1713-1714. Richard was raised by John Bolling, and lived next to him on Mohawk Creek, in Henrico Co. I have the document of his release to John Bolling, and also documents re his appointment to Clerk of the Vestry, Henrico Parish.

There is an unsourced claim that middle name is Fairfax, but this is doubtful. 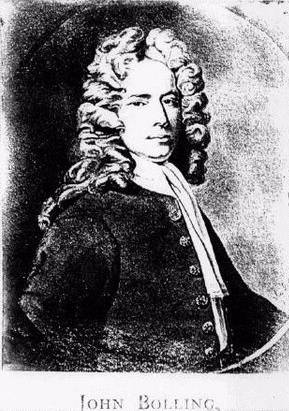 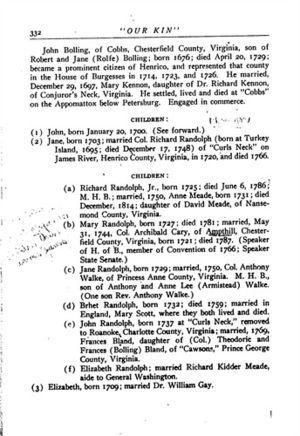 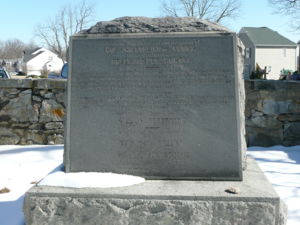 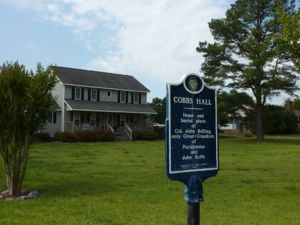 Leave a message for others who see this profile.
There are no comments yet.
Login to post a comment.
Russ Livingston
Bolling-1305 and Bolling-10 appear to represent the same person because: B-1305 was In the rejected match list... Clearly this Is a duplicate and this and other family members need to be merged...
posted Oct 02, 2021 by Russ Livingston

Jillaine Smith
Virginia Project, could you please attend to the inaccurate children attached that Kathie has pointed out? Many thanks!
posted Aug 27, 2020 by Jillaine Smith

LaQuita Holland
How can I add Col. John Fairfax Bolling as the father to Jane (Kennon) Bolling on my family tree? I'm related through Winniford "Winney" Randolph. Thank you in advance for your help!
posted Feb 22, 2020 by LaQuita Holland
Darrell Gabbard II
i was wondering if there was a daughter named Susan born around 1720? I've seen other lists of Red Bollings with her on it. just inquiring
posted Sep 29, 2019 by Darrell Gabbard II
Shannon Broughton
I am trying to find out about a possible daughter of John Bolling named Elenor, born in 1702. She married Originall Wroe, it has been said a descendant of theirs Rebecca Wroe is a direct descendant of Pocohontas.
posted Dec 02, 2018 by Shannon Broughton