Napoléon III Bonaparte was a member of the aristocracy in Europe.

Louis-Napoléon Bonaparte was the first President of the French Republic and, as Napoleon III, the ruler of the Second French Empire. He was the nephew and heir of Napoleon I. Elected President in France's first ever popular vote in 1848, he initiated a coup d'état in 1851, before ascending the throne as Napoleon III on 2 December 1852, the forty-eighth anniversary of Napoleon I's coronation. He ruled as Emperor of the French until 4 September 1870. He holds the distinction of being both the first titular president and the last monarch of France.

As President of the Republic, Louis-Napoléon sent French troops to help restore Pope Pius IX as ruler of the Papal States in 1849 after his rule had been overthrown by the revolutionaries led by Giuseppe Mazzini and Giuseppe Garibaldi who had proclaimed the Roman Republic. French troops remained in Rome to protect the Pope until the outbreak of the Franco-Prussian War in 1870.[1]

Is Napoléon III your ancestor? Please don't go away!

ask our community of genealogists a question.
Sponsored Search by Ancestry.com
DNA
No known carriers of Napoléon III's DNA have taken a DNA test. 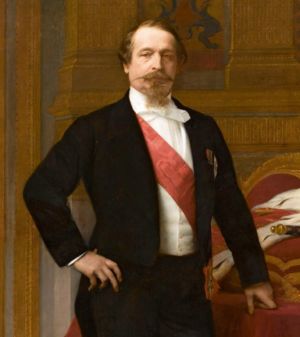 Susan Hulsey
I have 5 E1B1B1C1 matches on Gedmatch. As I understand, this is a rare Haplogroup. My maternal 2nd Great Grandfather who was French, said that he was a Grandson of Napoleon Bonaparte. I also have a distant DNA match relative on Ancestry DNA who is linked to Francois Beauharnais.
posted Feb 27, 2019 by Susan Hulsey

Greg Lavoie
The cited DNA article does not indicate that Napoléon III was born to an unknown father. Rather, it indicates that he does not appear to be the biological nephew of Napoléon I. It indicates that the non-paternity event may have occurred another level up in the tree. In other words, it is possible that Buonaparte-21's father was someone other than Buonaparte-1.
posted Feb 24, 2019 by Greg Lavoie