Life of Shadrach Bond .
Transactions of the Illinois State Historical Society for the year 1929

LAST WILL OF SHADRACH BOND. In the name of God, Amen. I, Shadrach Bond, of Randolph county and State of Illinois, being of sound mind and memory, do declare and ordain this to be my last will and testament touching my worldly possessions and hereby revoking all others, viz.

First, I require all my just debts to be paid.

Second, I give to my loving wife, Achsah Bond, all my personal property upon condition that she support and educate my children, giving them a good English education, and raise my two sons, Thomas Shadrach and Benjamin Nichodemus, to some professional business if they shall desire it when they shall respectively arrive at the age of seventeen years-upon the like conditions I give her all the rents and fees from my several farms and the use and profits of the mill situated on the farm on which I now live during her widowhood or until the children respectively to whom they are hereinafter devised shall arrive at the age of twenty-one years or be married. I also bequeath to my said wife my house and lot in Kaskaskia where I formerly resided in trust to be sold to raise a fund to pay the legacies hereinafter mentioned. I also bequeath to my wife my negro Frank Thomas and Providence and the residue except those hereinafter specially devised.

Third-I give to my daughter, Isabelle Fell, and her heirs all that tract of land lying ini Monroe county known by the name of Paeon Grove, formerly owned by John Sullivan, containing four hundred acres and the fractions on the east of it, on the west and north of it.

Fourth-I give to my daughter, Julia Rachel, and her heirsi all that tract of land lying south of the above containing four hundred acres originally claimed by Peter Zipp and also the fractions lying east of it.

Fifth-I give unto my daughter, Achsah Mary, and her heirs all that tract of land lying in Monroe county originally claimed by James Curry, containing four hundred acres, and also the southwest quarter of section No. 16 in Township No. 2 South of Range No. 11 West, devised to me by Abraham Amos.

Sixth-I give to my son, Thomas Shadrach, and his heirs that tract of land upon which I now live, being the same conveyed to me in separate parcels by Pierre Menard (one part) and George Fisher (the other), containing altogether about three hundred and thirty-seven acres, and the northeast fractional half of section 25 (in two separate detached fractions) in township six, south of range 8 west. But this bequest to my son Thomas Shadrach is on this condition, that he pay tq his brother, my son Benjamin Nichodemus, when he shall attain the age of twenty-one years, one thousand dollars, and to secure the payment thereof to my son Benjamin when he attains the age of twenty-one, I do hereby charge the several tracts of land hereby devised to my son Thomas with the payment thereof. But if my son Benjamin should die before he arrives at the age of twenty-one years and without heirs of his body then my son Thomas shall be holden acquitted and discharged from the payment of the said sum of one thousand dollars.

Seventh-I give to my son Benjamin Nichodemus one thousand dollars to be paid his as above by his brother Thomas and I also give him that part of section 30 in township 3 north of range 9 west, lying in Madison county which belongs to me. If any of the real estate hereby bequeathed to my children be taken from them or either of them the res idue of the children shall make them or either of them due compensation for the loss.

Ninth-It is my intention that my wife Achsah shall be charged with the payment of the legacies to my daughters as they shall respectively come of age or be married and to enable her to do this and raise and educate my children as aforesaid all my personal estate and the rents and profits of my farm and mill together with my house and lot in town have been bequeathed to her.

Tenth-It is also my intention that she shall have the use of the farm on which I live together with the mill thereon until my son Thomas shall arrive at the age of twenty-one years.

Eleventh-If any estate shall hereafter descend to me or be bequeathed to me it is my desire it be equally divided among my children.

Twelfth-All the residue of my real estate I give and bequeath to my daughters Julia Rachel, Achsah Mary and Isabelle Fell and their heirs to be equally divided among them.

Thirteenth-I make and constitute my wife Achsah Bond sole executor of my last will and testament.

Fourteenth-It is my intention that my debts be paid out of the personal estate hereby devised to my wife and that the pecuniary legacies to my daughters shall only be demandable of my wife when they marry or attain the age of twenty-one years without interest.

In testimony whereof I have hereunto set my hand and seal this seventh day of April in the year of our Lord one thousand eight hundred and thirty-two. Shadrach Bond.

Witnesses who saw him sign and subscribe the names in his presence. Nath Pope, Nancy Guriethe, Susan Roberts.

Is Shadrach your ancestor? Please don't go away!

ask our community of genealogists a question.
Sponsored Search by Ancestry.com
DNA
No known carriers of Shadrach's DNA have taken a DNA test. 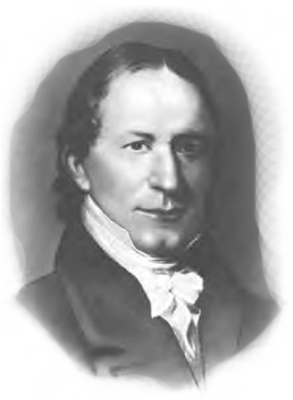