Salvatore Phillip "Sonny" Bono (/ˈboʊnoʊ/; February 16, 1935 – January 5, 1998) was an American recording artist, producer, and politician who came to fame in partnership with his second wife Cher, as the popular singing duo Sonny & Cher. He was mayor of Palm Springs, California, from 1988 to 1992, and congressman for California's 44th district from 1995 until his death in 1998.

The United States Federal Copyright Term Extension Act, which extended the term of copyright by 20 years, is now commonly known as the Sonny Bono Act.

Salvatore "Sonny" Bono was the son of Italian immigrant Santo Bono and Zena "Jean" La Valle Bono. He was the youngest and only son of three children.

The family moved from Detroit to Santa Barbara in 1942. Sonny was given his nick name by his mother and it stuck throughout his life.

Sonny began his music career in the late 1950's when he went to work for Speciality Records and met some of the superstars of that era. One of Sonny's first songs -"You Bug Me, Baby" - written with and song by Larry Williams, peaked at #45 on the US charts in 1957. Sonny quickly emerged as a mainstay for Phil Specter's groups writing for the Standells, Jackie DeShannon and the Searchers, before starting his own career with his second wife Cher.

Sonny and Cher's first hit "I Got You, Babe" reached #1 on the Billboard Charts in 1965 and is listed as one of the top 500 songs by the magazine Rolling Stone.

In 1964, Sonny married Cher (Cherilyn Sarkisian) and they had one child, Chastity (later Chaz Bono), born March 4, 1969. They divorced in 1975, but remained working partners.

In 1983 Sonny married Susie Coelho, but divorced her in 1984. There were no children from this union.

Finally, Sonny married Mary Whitaker in 1986 and they had two children, son Chesare Elan on April 25, 1988 and daughter Chianna Maria on February 2, 1991.

Sonny became interested in politics after he had problems with licensing for opening a second restaurant in Palm Springs, California. He ran successfully for Mayor of Palm Springs and served four years from 1988-1992. During his time as Mayor, he helped establish the Palm Springs Film Festival which is still held annually in his honor.

Sonny was elected to the United States House of Representatives in 1994 to represent California's 44th congressional district. He held this position at the time of his death in 1998. His widow, Mary Bono, succeeded him and held office until 2013.

Sonny died as a result of injuries received in a skiing accident. He is buried at the Desert Memorial Park, in Cathedral City, Riverside County, California, USA, Plot: B-35, #294.

Is Sonny your relative? Please don't go away!

ask our community of genealogists a question.
Sponsored Search by Ancestry.com
DNA
No known carriers of Sonny's DNA have taken a DNA test. 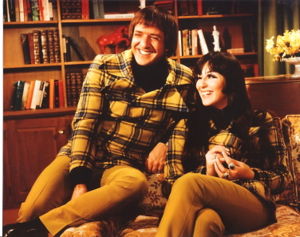 Sonny is 23 degrees from Jaki Erdoes, 25 degrees from Wallis Windsor and 21 degrees from Henry VIII of England on our single family tree. Login to find your connection.