María Cristina Borbone was a member of the aristocracy in Europe.

Born in Palermo, Sicily on 27 April 1806, she was the daughter of King Francis I of the Two Sicilies by his second wife, Maria Isabella of Spain.

With the death on 27 May 1829 of the third wife of Ferdinand VII of Spain, the Spanish king was in need for a male heir to succeed to the crown. This led to his fourth marriage, just seven months later (11 December 1829), to Maria Christina. If the rushed marriage was not awkward enough, King Ferdinand was also her uncle by both birth and marriage. Maria Christina's mother, Maria Isabella, was King Ferdinand's sister; both were born to King Charles IV of Spain and his wife, Maria Luisa of Parma.

When Ferdinand died on 29 September 1833, Maria Christina became regent for their daughter Isabella. Isabella's claim to the throne was disputed by her uncle, the Infante Carlos, Count of Molina, who claimed that his brother Ferdinand had unlawfully changed the succession law to permit females to inherit the crown (see Carlism). Some supporters of Don Carlos went so far as to claim that Ferdinand had actually bequeathed the crown to his brother but that Maria Christina had suppressed that fact. It was further alleged that the Queen had signed her dead husband's name to a decree recognizing Isabella as heir.

Carlos' attempt to seize power resulted in the Carlist Wars. Despite considerable support for Carlos from the Roman Catholic Church and conservative elements in Spain, Maria Christina successfully retained the throne for her daughter. The Carlist Wars grew from a dispute about the succession into a dispute over the future of Spain. The supporters of Maria Christina and her daughter favored a liberal constitution and progressive social policies. In contrast, Carlos' supporters (called Carlists) favored a return to traditional society and an absolute monarchy. Ultimately, the army's loyalty to Isabella II proved the decisive issue in the war.

Maria Christina died in Le Havre, France on 22 August 1878[1]. As the widow of Ferdinand VII and the mother of Isabella II, Maria Christina was buried in the royal crypt of El Escorial monastery.[2]

Maria Christina Ferdinande de Bourbon y Bourbon, dowager Queen of Spain, former regent of the kingdom, died on 22 August 1878 in her château Mon-Désir, rue des Brindes in Le Havre. She was born in Palermo (Two Sicilies) on 27 April 1806, the daughter of His Majesty the King of the Two Sicilies, Francis I, and Marie Isabelle de Bourbon; widow of His Majesty King Ferdinando VII, and secondly of Don Augustin Fernando Muñoz, duke of Riansares[1].

Is María Cristina your ancestor? Please don't go away!

ask our community of genealogists a question.
Sponsored Search by Ancestry.com
DNA
No known carriers of María Cristina's DNA have taken a DNA test. 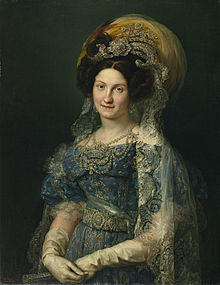