Widely considered one of the great beauties of the Italian Renaissance, Lucrezia had very fair skin, hazel eyes and lush blonde curls that came down to her knees as a teenager.

Her life was almost completely controlled by the political and social ambitions of her father and older brother Cesare. Their ambiguous personal libertine relationships scandalized contemporaries, especially as her father was a high-level Roman Catholic prelate whose intrigues made him a cardinal and finally Pope Alexander VI in 1492 when Lucrezia was just 12 years old. By that time, Lucrezia had already been betrothed two times, both being broken off by her father as his fortunes and that of the Borgia family rose.[1]

In 1492, after Rodrigo's election as Pope Alexander VI, he arranged Lucrezia's marriage to Giovanni Sforza, an illegitimate scion of the powerful Sforzas, rulers of Milan and Lombardia. The marriage was by proxy and led to Lucrezia being housed in the sumptuous Farnese palace next to the Vatican with her father's mistress, Giulia Farnese. The Pope was known to have a private entrance.

When the young Count arrived in Rome to claim his bride, the wedding banquet, where 500 "maidens" led by Giulia Farnese attended the bride, featured a bawdy comedy by the ancient Roman playwright, Plautus, full of libertines, pimps and Roman strumpets.[2]

For the next two years, Lucrezia lived a quieter life as Lady of Pesaro, a Northern region where her husband was Signore (Lord) and the Pope's emissary. At 15, however, she and Giovanni were recalled to Rome. Lucrezia's social life blossomed and she served as her father's Vatican hostess at diplomatic receptions. Due to the changing vagaries of Italian politics, Pope Alexander VI and his son Cesare now found her Sforza husband a hindrance to their designs rather than an asset. Apparently, originally her father planned to kill him but Lucrezia, less murderous than her later reputation, warned him and he fled.[2]

An annulment was arranged instead. As the couple had no children, the Vatican forced Giovanni to swear that he'd been impotent, sufficient grounds for rescinding the marriage. Supposedly sequestered at the convent of San Sisto in 1497 during the annulment process, Lucrezia apparently had an affair with her page, Perotto, and had his child in secret. He paid for this indiscretion with his life as did her maid who knew too much. The infant was kept hidden for at least three years and later "legitimized" by a Papal decree as a son of Cesare. Rumors swirled that the father had not been the hapless Perotto but rather the Pope himself or perhaps Cesare Borgia.[2][3]

In July 1498 Lucrezia was married to Alfonso d´Aragona, Principe di Salerno, Duca di Biscaglia, the illegitimate son of Alfonso II, King of Naples. This time the nuptials were a quiet, family affair; they cemented a new Papal alliance with Naples and Aragon in Spain. The 17-year-old Alfonso was called "the fairest youth in Rome" by a contemporary writer and Lucrezia seemingly had genuine feelings for him. On All Hallows Eve 1499, she bore him a son, Rodrigo d'Aragona, named after her father. [4]

Unfortunately for the young family, Papal politics intervened once again and in 1500 Alexander VI and Cesare Borgia allied themselves with the Kings of Navarre and France, traditional enemies of the rulers of Naples and Aragon (Spain). That summer they invaded Naples and Sicily. Alfonso initially fled but he was lured back to Rome by the Borgia family, using Lucezia and little Rodrigo as bait.[2]

In mid-July, Alfonso was stabbed on the steps of St. Peters but he survived and Lucrezia helped nurse him; on August 16, 1500, armed men broke into their home in Rome and strangled him. So, before Rodrigo was one year old, his father had been cruelly murdered, some say by Cesare Borgia's own hand, others say on orders of the Pope. The young nobleman had other enemies and, as was usual in the Vatican and Rome of the Renaissance, no witnesses to the killing were ever found.[2]

Tragically, little Rodrigo d'Aragona was declared persona non grata in Borgia territory, so he was sent to Bari, a Neapolitan city, where he died at 12, before his mother's passing. Thus, at 20 years old, Lucrezia Borgia had given birth to two sons but each time she was forced to abandon her infant child due to the political requirements of her father and brother. Lucrezia resumed her role as the Vatican's hostess and was even named manager of the Vatican household by her ageing Papal father. By all accounts she did a good job of running day-to-day Church affairs with the help of the Roman Curia, the only time a woman is known to have held such a function.[2]

In 1502, claiming publicly still to be a virgin, Lucrezia was married to Alfonso d'Este, Duca di Ferrara. Although only 26, he was a childless widower and from a renowned Italian noble line. Lucrezia was 21, beautiful, and it was known she was able to bear children despite what was formally declared in her marriage contract. The Pope arranged a very generous dowry that included; 100,000 ducats in cash, almost as much again in lands, 75,000 ducats in jewels, plate, clothes, linen and tapestries and a reduction in the annual tribute due to the papacy, from 4,000 to 100 ducats to seal the alliance.[5]

A traditional military commander and country aristocrat, Alfonso d'Este paid more attention to his hunting parties and troop exercises than his wife. Nonetheless, when she moved to Ferrara and away from Vatican intrigue, Lucrezia proved an excellent Duchess and household manager. She still remained involved in politics, helping her brother Cesare whenever she could. And she became a patron of the Arts, in part due to an affair she had with the poet Pietro Bembo.[6]

After giving birth to her final child, Isabella Maria d'Este, who died shortly afterwards, Lucrezia d'Este contracted puerperal fever and died in Ferrara on June 24, 1519. She was just 39 years old.[3]

Sponsored Search by Ancestry.com
DNA
No known carriers of Lucrezia's DNA have taken a DNA test. 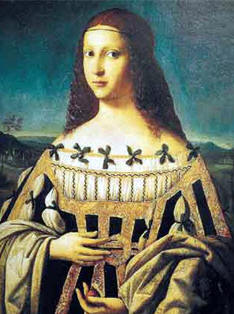 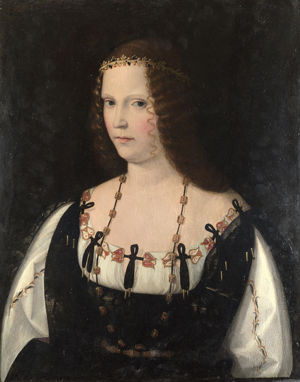 Would you have some time to add inline citations to this bio so it is up to Examples gallery standards by Tuesday?

Wendy (Smith) Hampton
I have visited her tomb which is in a small peaceful convent in Ferrara, Italy. It is a closed order, but the nun who showed us her tomb also told us about her charitable works, albeit from the other side of a grill. Do visit if you are ever in Ferrara, also the d'Este castle which is in the middle of this beautiful medieval town.
posted Feb 17, 2015 by Wendy (Smith) Hampton

Lucrezia is 21 degrees from Donald Howard, 17 degrees from Julia Howe and 5 degrees from Henry VIII of England on our single family tree. Login to find your connection.