Ermes Effron Borgnino, known as Ernest Borgnine (January 24, 1917 – July 8, 2012) was an American film and television actor whose career spanned more than six decades. He was an unconventional lead in many films of the 1950s, winning the Academy Award for Best Actor in 1955 for Marty. On television, he played Quinton McHale in the 1962–1966 series McHale's Navy.

Ernest Borgnine was born Ermes Effron Borgnino on January 24, 1917, in Hamden, Connecticut. He was the son of Anna (née Boselli; 1894–1949), who emigrated from Carpi (Modena, Italy) to the United States, and Camillo Borgnino (1891–1975), who emigrated from Ottiglio (Alessandria, Italy). Borgnine's parents separated when he was two years old, and he and his mother lived in Italy for about 4 1/2 years.

He served a total of almost ten years in the Navy, during all of World War II, and obtained the rank of gunner's mate 1st class.

ask our community of genealogists a question.
Sponsored Search by Ancestry.com
DNA
No known carriers of Ernest's DNA have taken a DNA test. 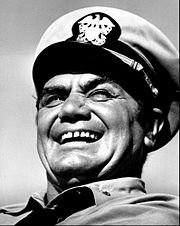 Ernest is 22 degrees from Donald Howard, 21 degrees from Julia Howe and 20 degrees from Henry VIII of England on our single family tree. Login to find your connection.