Walter was born in 1884 in Tuapeka, Central Otago, New Zealand, and grew up in nearby Beaumont.[1][2] He was (at least) the tenth child of Sarah (Moss) Borthwick) and Alexander Borthwick, immigrants from West Yorkshire/Durham, England.

Walter was 5’4’’ and weighed 121lb in 1914 (according to army enlistment records). He had light brown hair, blue eyes, and "fresh" complexion. He had a tattoo of an anchor on his right fore-arm. He worked as a billiard marker and billiard room proprietor in South Dunedin,[3] and was listed as being part of the Church of England. He had also worked as a farm labourer.[2] Like his father, Walter was involved in the Beaumont Jockey Club,[4][5] and he bought a horse in 1911.[6]

Walter served in the New Zealand Expeditionary Force (forerunner to the NZ Army) between 1914 to 1919, serving 2 years 140 days, including 1 year 279 days in action in Western Europe during World War 1 (1917-1918).[2] He enlisted in D Company of the 25th Reinforcements, which were sent to Europe in 2017 to replace soldiers who had died or been discharged. Walter did not want to go to war and appealed his conscription in Jan 2017 on the ground of public interest and undue hardship, citing his two brothers at the front, his recent marriage, and his new business. However, the Chairman dismissed the appeal, reasoning that "keeping a billiard saloon is certainly not in the public interest."[3] From 20 April 2017 he was posted to the B company of the 4th (Reserve) Otago Battalion, based at Sling Camp on the Salisbury Plain in Wiltshire, England. When Walter arrived at the front on 9 Nov 1917, he was posted to the 3rd Otago Battalion within the 4th NZ Infantry Brigade, in perhaps the 10th and/or D Company.[7][8] On 24 Feb 1918 he transferred to the 3rd Battalion of the 3rd New Zealand (Rifle) Brigade (perhaps A Company), and took on the specific rank of Rifleman. He was discharged on account of wounds, apparently a wound to his hand received in Somme on April 6th 1918, which led to a septic hand and took a long time to heal. He received a British War Medal and Victory Medal.[2]

After the war Walter got veteran rehabilitation land at Clarks Flat. They needed to establish a new farm on uncleared land. They cleared the land, but they lost it at the start of the Great Depression. They moved to Tuapeka West where Walter worked as a farm labourer, then to Dunedin in 1928. He stayed in Dunedin for the rest of his life.[1]

Walter died in Dunedin on 12 Jul 1960 of leukaemia .[2][9] The cemetery records state that his last occupation was Gardener. His last address was 49 Young Street, St Kilda, Dunedin. He is buried at Andersons Bay Cemetery, Dunedin, Block 220, Plot 0097, in the same plot as his son Graham. Many years later his wife would have her ashes interred in the same plot.[10]

Thanks a lot to Dieter Lewerenz for responding on G2G and helping me understand Walter's (my great-grandfather's) military records to figure out which military units he was part of. Anderson-53301 21:02, 18 November 2020 (UTC)

ask our community of genealogists a question.
Sponsored Search by Ancestry.com
DNA Connections
It may be possible to confirm family relationships with Walter by comparing test results with other carriers of his Y-chromosome or his mother's mitochondrial DNA. However, there are no known yDNA or mtDNA test-takers in his direct paternal or maternal line. It is likely that these autosomal DNA test-takers will share some percentage of DNA with Walter: 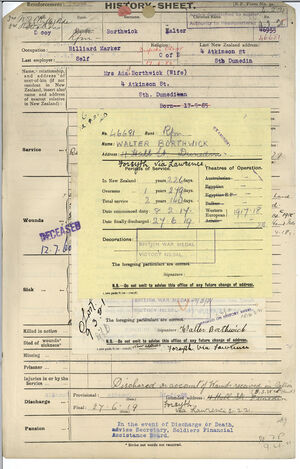 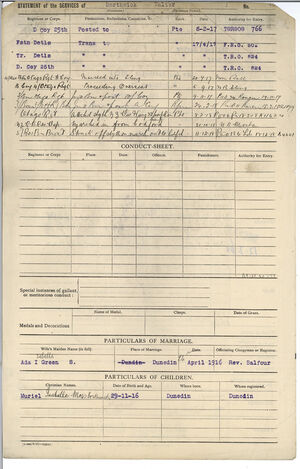 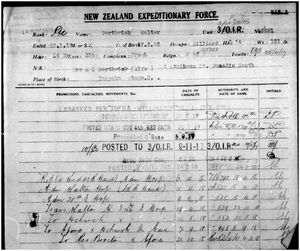 The Bulford Kiwi at Sling Camp, from Postcard, c.1919. 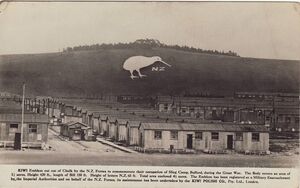 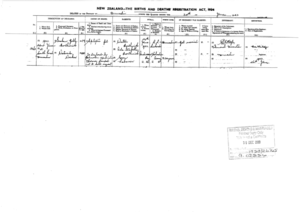