Caroline Bouchard is and will always remain a mystery. The story I was told by family genealogist Suzette years ago, if I recall correctly, is that Caroline is the daughter of an unknown full blooded Indian woman and Raoul Bouchard. Her parents were killed during a raid. I don't know who raided who but Suzette claimed that she saw Caroline's actual birth record and it stated that her mother was "unknown" which was usually what they put in the records when the parent was not white or catholic. Caroline survived the raid and was taken in by relatives. Suzette said that Raoul Bouchard was Caroline's father but I don't know if that was taken from the birth or death record. Raoul Bouchard is listed as her father on her death certificate but I have never found a record of a Raoul old enough to be her father. Also her age at death places her born in 1850 and her name is Corine so I don't know how accurate any of the information is other than the death date. After years of research Suzanne concluded that Marie St. Pierre was Caroline's mother, as well as Indian, but since Marie died in 1910 we can rule out that she was killed during a raid. Recently a birth record was added for Marie Henriette Bouchard daughter of Aulure and Marie. The finder believes it's Caroline. I find it difficult to believe that her birth name would be completely disregarded especially since Marie Henriette was named after her Godmother. If the 1861 Canada Census is correct then Caroline was born in 1857. If the 1880 is correct then she was born in 1858. If the marriage record is truly hers then she was born in 1857 with Peter and Eliza as her parents; acting or not. The 1880 Census places her in Canton Massachusetts as does the marriage record dated the same year. Based on all the recorded evidence I think two things are possible. One, Marie had Caroline after Aulure died and before she married Jean in which case we will never know the father. Because she was a Bouchard on the census we can rule out Jean as her father. Two, none of the people associated with her as parents are her parents because Caroline's birth parents, Raoul and the unknown Indian mother, actually were killed during a raid and she truly was taken in by relatives. This much we know for certain. The two surviving Mullaney daughters never met her but my aunt, Ilene Mullaney Greene, once told me that, as a child, she remembered that Caroline had very long black hair. So long that when she sat in the rocking chair, the ends touched the floor. Ilene was fourteen when Caroline died and a photo shows Caroline did have dark hair so I will trust aunt Ilene. It has been a long and tedious search with questions that I believe will never be answered.

Caroline "Carri" was born at some point after 1849 and before 1861 in Canada possibly to Aulure Bouchard and Marie St Pierre. In 1858 Marie married Jean Coté and Caroline used the surnames Bouchard, Coté Bouchard, Bouchard Cote/Cody but never just Cote. She has been recorded by the first names Caroline, Carolina, Carri, and Corine. She definitely married Alexandre DuSablon in 1880 and they had thirteen children of which only 7 survived but 8 have been recorded. I know this because on the 1910 Census where it asks how many children Caroline had, she stated 13 and that only 7 survived.

Is Carri your ancestor? Please don't go away!

ask our community of genealogists a question.
Sponsored Search by Ancestry.com
DNA Connections
It may be possible to confirm family relationships with Carri by comparing test results with other carriers of her mitochondrial DNA. However, there are no known mtDNA test-takers in her direct maternal line. It is likely that these autosomal DNA test-takers will share some percentage (beta) of DNA with Carri: 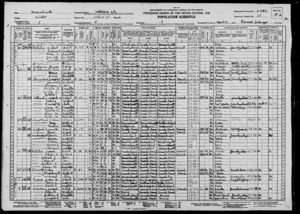 Marriage record of Alexander and Caroline 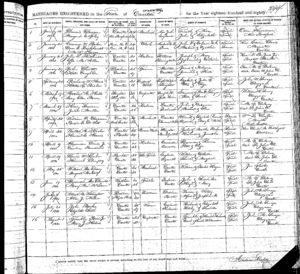 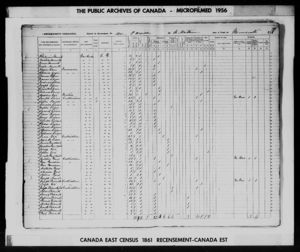