Louis XVIII Bourbon was a member of the aristocracy in Europe.

Louis XVIII (Louis Stanislas Xavier; 17 November 1755 – 16 September 1824), known as "the Desired" (le Désiré),[1] was a monarch of the House of Bourbon who ruled as King of France from 1814 to 1824 except for a period in 1815 known as the Hundred Days. Louis XVIII spent twenty-three years in exile, from 1791 to 1814, during the French Revolution and the First French Empire, and again in 1815, during the period of the Hundred Days, upon the return of Napoleon I from Elba.

Until his accession to the throne of France, Louis held the title of Count of Provence as brother of King Louis XVI. On 21 September 1792, the National Convention abolished the monarchy and deposed King Louis XVI, who was later executed by guillotine.[2] When the young Louis XVII, Louis XVI's son, died in prison in June 1795, Louis XVIII succeeded his nephew as titular King.[3]

Louis XVIII, Louis le Désiré, Louis-Stanislas-Xavier, comte de Provence, third son of the dauphin Louis, son of Louis XV, and of Maria Josepha of Saxony, was born at Versailles on the 17th of November 1755. His education was supervised by the devout duc de la Vauguyon, but his own taste was for the writings of Voltaire and the encyclopaedists. On the 14th of May 1771 took place his marriage with Louise-Marie-Josephine of Savoy, by whom he had no children. His position at court was uncomfortable, for though ambitious and conscious of possessing greater abilities than his brother Louis XVI, his scope for action was restricted; he consequently devoted his energies largely to intrigue, especially against Marie Antoinette, whom he hated. During the long absence of heirs to Louis XVI, "Monsieur", as heir to the throne, courted popularity and took an active part in politics, but the birth of a dauphin (1781) was a blow to his ambitions. He opposed the revival of the parlements, wrote a number of political pamphlets, and at the Assembly of Notables presided, like the other princes of the blood, over a bureau, to which was given the name of the Comité des sages; he also advocated the double representation of the tiers. At the same time he cultivated literature, entertaining poets and writers both at the Luxembourg and at his château of Brunoy, and gaining a reputation for wit by his verses and mots in the salon of the charming and witty comtesse de Balbi, one of Madame's ladies, who had become his mistress, and until 1743 exerted considerable influence over him. He did not emigrate after the taking of the Bastille, but, possibly from motives of ambition, remained in Paris. Mirabeau thought at one time of making him chief minister in his projected constitutional government, but was disappointed by his caution and timidity. The affaire Favras (December 1789) aroused great feeling against Monsieur, who was believed by many to have conspired with Favras, only to abandon him. In June 1791, at the time of the flight to Varennes, Monsieur also fled by a different route, and, in company with the comte d'Avaray -- who subsequently replaced Mme. de Balbi as his confidant, and largely influenced his policy during the emigration -- succeeded in reaching Brussels, where he joined the comte d'Artois and proceeded to Coblenz, which now became the headquarters of the emigration.[2]

Is Louis XVIII your ancestor? Please don't go away!

ask our community of genealogists a question.
Sponsored Search by Ancestry.com
DNA Connections
It may be possible to confirm family relationships with Louis XVIII by comparing test results with other carriers of his ancestors' Y-chromosome or mitochondrial DNA. Y-chromosome DNA test-takers in his direct paternal line on WikiTree: 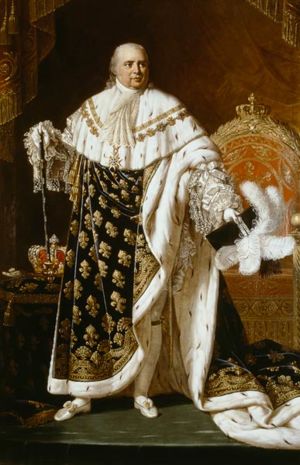 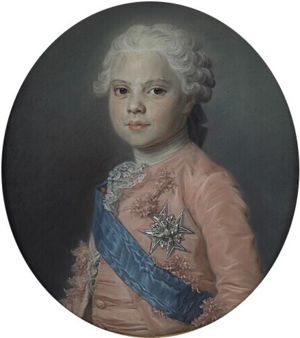 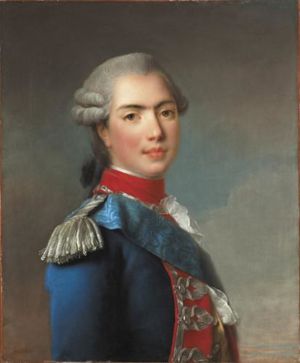 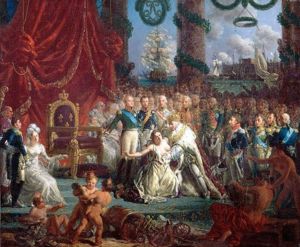 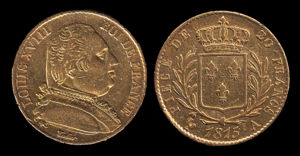 Louis XVIII is 22 degrees from Jaki Erdoes, 10 degrees from Wallis Windsor and 9 degrees from Henry VIII of England on our single family tree. Login to find your connection.