He was feudal baron of Bampton in Devon.

Origins John Bourchier was born in Essex, England, the eldest son and heir of Fulk Bourchier, 10th Baron FitzWarin (d. 18 September 1479) by his wife Elizabeth Dynham, 2nd daughter and co-heiress of John Dynham, 6th Baron Dynham. He was the brother of Elizabeth Bourchier.

Small monumental brass (c. one ft high) in St Brannock's Church, Braunton, Devon, of Lady Elizabeth Bourchier (d.1548), daughter of John Bourchier, 1st Earl of Bath & wife of Edward Chichester (d.1522) of Raleigh, Pilton. She kneels at prayer before a prie dieu on which is an open book. Gothic text inscription under: "Here lyethe Lady Elyzabethe Bowcer daughter of John Erle of Bathe & sumtyme wyffe to Edwarde Chechester Esquyer the whyche Elyzabethe decessyd the XXXIIIth day of August in the yere of O_r Lorde God M Vc (i.e. 5*c) XLVIII apon whose soule God have m(er)cy". The brass is a palimpsest, engraved on the reverse is the face of a knight, with helmet unfinished, apparently containing an artistic error which led to its abandonment & reuse By his 1st wife Cecily Daubeny he had the following progeny:

John Bourchier, 2nd Earl of Bath (d.1560). Lady Elizabeth Bourchier (d.24 August 1548), married Edward Chichester (c.1496-1522), of Raleigh, Pilton, Devon. Her monumental brass, depicting a small kneeling figure with separate inscription, exists in St Brannock's Church, Braunton, Devon. Amias Bourchier Lady Dorothy Bourchier, married Sir John Fulford. Giles Bourchier Lady Margaret Bourchier Lady Anne Bourchier Lady Eleanor Bourchier Death & burial[edit] John Bourchier, 1st Earl of Bath was buried in Bampton Church in Devon, in which he had endowed a chantry. Although part of an elaborate chest tomb survives in the church, it is according to Pevsner that of his grandmother Thomasine Hankford (d.1453), heiress of Bampton, wife of William Bourchier, 9th Baron FitzWarin(1407-1470).[8] The 1st Earl's tomb, which was destroyed sometime after 1770, was situated in the north aisle of Bampton Church and showed effigies of himself and his wife Cecily Daubeny with their 8 children.(1)

He was married three times:

1. First marriage to Cecily Daubeny, daughter of Giles Daubeny, Baron Daubeny and Elizabeth Arundell. They had eight children. (see below)

2. He married secondly to Florence Bonville, daughter of John Bonville and Katharine Wingfield.

3. His third marriage was to Elizabeth Wentworth, daughter of Sir Henry Wentworth and Anne Say, also being her third husband. 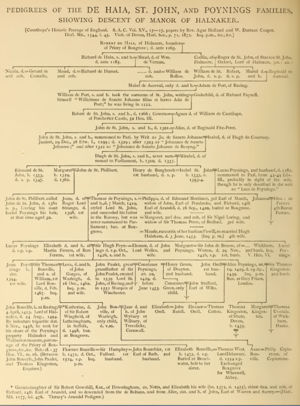 Bourchier-357 and Bourchier-2 appear to represent the same person because: duplicate profiles for his father should be merged; these duplicates should also be merged. Thanks!