"Berenguela of Castile (1180-1246) was one of the most powerful women in Europe. As queen-consort of Alfonso IX of León, she acquired the troubled boundary lands between the kingdoms of Castile and León and forged alliances with powerful nobles on both sides. Even after her marriage was dissolved, she continued to strengthen these connections as a member of her father's court. On her brother's death, she inherited the Castilian throne outright—and then, remarkably, elevated her son to kingship at the same time. Using her assiduously cultivated alliances, Berenguela ruled alongside Fernando and set into motion the strategy that in 1230 would result in his acquisition of the crown of León—and the permanent union of Castile and León." ~ Janna Bianchini (2010)[1]

Sponsored Search by Ancestry.com
DNA
No known carriers of Berengaria's DNA have taken a DNA test.

Images: 2
Statue of Berenguela of Castile 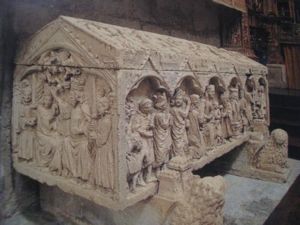 Berengaria is 24 degrees from Jaki Erdoes, 21 degrees from Wallis Windsor and 10 degrees from Henry VIII of England on our single family tree. Login to find your connection.