Is Beatrice your ancestor? Please don't go away!

ask our community of genealogists a question.
Sponsored Search by Ancestry.com
DNA
No known carriers of Beatrice's DNA have taken a DNA test. 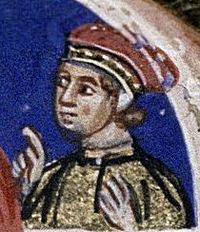 Wedding Frederick I likely suggested the marriage because the County of Burgundy would give him an alternative to the Brenner Pass and a strategically valuable position against Milan, and because of the additional troops of Burgundian knights available for his war.[1]

The wedding between Beatrice and Frederick took on 9 June 1156 at Würzburg.[2] After the wedding, the Bishop of Trier anointed Beatrice queen.

The poem Carmen de gestis Frederici I imperatoris in Lombardia, written about 1162, describes Beatrice upon her wedding day: