Richard Bourne aka Borne
Born about 1525 in Wells, Somerset, England

The Birth Date is a rough estimate. See the text for details.

Richard was born around 1525, possibly around Wiveliscombe in Somerset, England, the son of Philip Bourne. His mother's name has not been documented.

Richard had an older brother, Gilbert (Gylberte) Bourne, Bishop of Bath and Wells during the reign of Queen Mary.[1]

Richard would have married his wife Sylvester Tybolde (AKA Sylvestre Tybold or Tebold) around 1550. Together they had at least 7 sons.[2] Richard and part of his family pedigree can be found in the Visitation of Somerset of 1623. Only 3 sons are named in the pedigree, which is also pictured on this page.[3] More information about Richard's family can be found under the will subheading. He and his wife are buried in Wells Cathedral in Wells, Somerset, England.[2]

Richard's brother Bishop Gylberte Bourne died in 1569, and he bequeathed "the wreck" of his property to Richard Bourne of Wyvelscombe in Somerset.[1]

Richard was mentioned in a book about Wiveliscombe, in the section about the Bourne family. Part of the translated will is included there. The book indicates that Richard appears to have been Lord Farmer of the manor, which at the time of writing was still called Bourne House. In one of the rooms was said to be an elaborate ceiling of Elizabethan character. [6]

On 20 October 1554 a grant was made by Gilbert Bourne, bishop of Bath and Wells, to his brother Richard Bourne and Gylberte (son of Richard) of the reversion of the office of receiver-general of the manors and estates belonging to the see within the county of Somerset, for their joint lives, and the life of the survivor, with a yearly fee of 10l. This was confirmed by the dean and chapter, Nov. 2.—ƒo. 88.[7]

Richard left a will in 1593[10] that was proved in the Prerogative Court of Canterbury on 15 March 1594. A copy of the will is held in the National Archives [2]and a transcription of the will can be found here.

In his will, Richard expressed his desire to be buried next to his wife in the Cathedrall Church of welles, and he bequeathed the following:

1. To his eldest son Gylberte: All of his free land, the lease of the demeanes of Wivelscombe wyth the Custodye of the greate house there, the lease of his nowe dwellinge house scytuated and beinge wythin the libertyes of welles wyth his beste furniture of tapistrye hanginges belonginge to the greate chamber, The advonson of the Artchedeaconrye of Taunton, his greate quishion of clothe of goulde, his turkey carpettes, three of his best tapistray quishons, his best gowne faced wyth mantrns, and his best garmishe of pewter.
2. To his granddaughter Marye (daughter of Gylberte): his best and greate beddsteede and the best furnyture belonginge to the same beddsteede.
3. To his son John Bourne, the scarlette gowne and three of his best tapistrye quishions.
4. To his son William: 20 pounds and his second best gowne faced wyth martyns and also that Featherbedd and Boulster which he did of late borrowe of Richard.
5. To his son Roger: his gowne faced wyth sattyn.
6. To his son Richard: 100 marks three years after the death of the testator, and 5 pounds a year toward his maintenance.
7. To his son Thomas: If he was found alive within in 3 years of the death of the testator, then he was to receive 100 pounds, and a yearly sum of "sixe poundes thirteane Shillinges eighte pence a year towarde his mayntenaunce." If he didn't turn up within 3 years the hundred pounds was distributed to Richard. Thomas was to receive the rest of his bequest, if found alive.
8. To his youngest son Jassper: twenty pounds, a featherbedd and boulster, his needle worke quishions that were in the waynscott cheste under the wyndowe in his greate Chamber.
9. "fourtye shillinges to the com[m]onaltye of the towne of welles fortye Shillinges towards the repayeringe of highe wayes nighe the Cittye of Bristoe, fortye Shillinges towards the repayeringe of the highe wayes nyghe Bridgewater".
10. To Jane Bourne: his best brass pot.
11. To his servant Harry: "fowertye Shillinges and of my apparrell such and soe much as my executor shall thynke meete".

Richard was granted the right to present his opinions and recommendations to the prebendary of Whitelackington and Whitchurch in 1559.[11]

Birth, marriage and death records were not able to be located. The most reliable source of information thus far is Richard's probated will.

It's not know if Jane Bourne was Richard's daughter. She might be a granddaughter.

See also unverified info from find-a-grave. This site says that Richard's wife died in 1605, but his will says she died before he did.[13]. This date error needs to be fixed in his wife's wikitree site.

This profile has been improved by a member of the England Project's Orphan Trail. 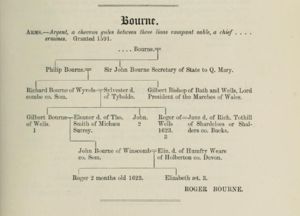