Col. Jim Bowie is legendary due to his family and his exploits, as well as his contributions to Texas and the Alamo history.[1]

The Bowie family lived in Franklin, Kentucky near Terrapin Creek and on Bowie's Mill Road (later Turnertown Road). Later, they lived in Missouri and finally settled in Catahoula Parish, Louisiana, where he grew up.[5][6][4]

James floated lumber down the rivers to be marketed in Avoyelles and Rapides parishes. He also invested in property on the Bayou Boeuf. There he hunted, fished, rode wild horses, and rode alligators.[10][4] He and brother joined the War of 1812. 1815 he was on the way to serve in Louisiana, but the war had ended. [11]

James owned and traded slaves just as his father had done. With sufficient money saved, he sold the plantation and slaves, with no further interest in owning either again.[12][4][13] In 1829, Jim joined the Masonic Order in Opelousas, Louisiana. After Jim’s death at the Alamo, the masonic apron was found with his possessions.[3]

Rezin Pleasant, Jr, Jim's brother, wrote that he had the first Bowie knife made at Avoyelles, Louisiana. It was created for his brother James to defend himself, and that James used the Bowie knife in the Sandbar Duel. After recovering from the wounds he received there, Jim moved to Texas.[4][14]

Entering the Mexican Texas Colony, Bowie and his friend, Isaac Donoho, stopped near Nacogdoches, at Jared E. Groce's farm on the Brazos River, and in San Felipe.[4] There Bowie presented a letter of introduction to impresario Stephen F. Austin.[4] Next, James and his brother Rezin went on an expedition to find the Lost San Saba Mine but were unable to locate it. They proceeded onto Saltillo, the then capitol of the Texas colony (now located in NW Mexico (160 mi) west of the Texas border).[5]

By February 20, 1830 James was in San Antonio de Bexar to present more letters of introduction to a wealthy settler, Juan MartÌn de Veramendi.[15][12] James married his daughter, Maria Ursula de Veramendi, age 19, April 25, 1831 in San Fernando Cathedral, San Antonio de Bexar, Texas Colony. By this time, Juan was his business partner. James signed a dowry contract for 15,000 pesos, presenting himself as age 30.[9][4][16] At the time of his marriage, James listed more assets than he may have owned, however he at least had an interest in the Acadia Plantatioln in Louisiana, which sold later for $90,000. It was still less than what James promised in the marriage contract. James and Maria settled in San Antonio.[12] From the marriage notice: "D[on] Santiago Buy con D[oñ]a Ursula de Beramendi".[4] They had two children,[9] Marie Elve Bowie, born March 20, 1832 and James Veramendi Bowie, born July 18, 1833. Unfortunately their union didn't last long, as Maria, her parents, and both of her children died of cholera in September 1833.[9]

On March 8, 1831, James authorized his brother Rezin Pleasant, Jr to be sell his property in Louisiana, Arkansas, and elsewhere.[3]

James' next endeavor was in land. Mexico was selling 11 league land grants to Mexican citizens. When the citizens purchased the grants, James bought the leagues from them.[12] Stephen F Austin eventually allowed James to settle there and accepted the tracts of land as part of the colony.

James fought in the Battle of Concepcion, November 26, 1835 and the, October through December 14, 1835, near San Antonio, including the Grass Fight.[12][4] Gen. Sam Houston, in a letter dated December 17, suggested a different assignment for Bowie.

January 1836, Jim was in charge of the group of volunteers at the garrison of the Alamo. [5]Former leader, Col. Neill, needed to leave for home to care for family, and requested Lt. Col William Travis to command the Texas Alamo military. Travis arrived in February, accompanied by a group of army troops to bolster the numbers defending the Alamo. There was conflict between the two leaders and their troops in the tiny Alamo. [5] Tension was only exacerbated by the fact that there was no heat in the Alamo, due to it being a mission.

James worked with William B Travis in their effort to stand up for the Texans' rights. Although there was still conflict between the volunteers defending the Alamo, led by Bowie, and William B Travis' troops, they finally resolved to co-share the defense. [5]Soon Jim became ill with either pneumonia or tuberculosis, mentioned in reports, but it isn't clear which. Adding to his situation, it was one of the coldest winters remembered for San Antonio. Jim was soon confined to a cot.[12]

The Mexican Army arrived February 23, 1836, led by General Santa Anna and began the attack on the Alamo, which lasted from February until March 6, 1836. All of the defenders were killed the final day, including James Bowie.

A memorial to defenders is in San Fernando Cathedral. [17] March 6, 1976, masons of Texas gathered at the Scottish Rite Temple, in San Antonio, Texas and marched in a cold rain to the Alamo to lay a bronze plaque to honor the masons who died at the Alamo[3] including James Bonham, James Bowie, David Crockett, Almaron Dickinson, William Barrett Travis, and other unidentified masons who gave their lives in the Battle of the Alamo. It was erected by the Grand Lodge.

Bowie County, Texas is also named in his honor.[18]

Upon becoming very ill in Natchez, Mississippi October 31, 1833, James wrote his will. In it he left property to brother Rezin Pleasant, Jr and to his brother-in-law, Alexander Sterett, married to his sister Martha. Both men were also the executors.[3]

Many donations and bounties were awarded to James' heirs. A few of them are listed below:

Sponsored Search by Ancestry.com
DNA Connections
It may be possible to confirm family relationships with James by comparing test results with other carriers of his Y-chromosome or his mother's mitochondrial DNA. However, there are no known yDNA or mtDNA test-takers in his direct paternal or maternal line. It is likely that these autosomal DNA test-takers will share DNA with James: 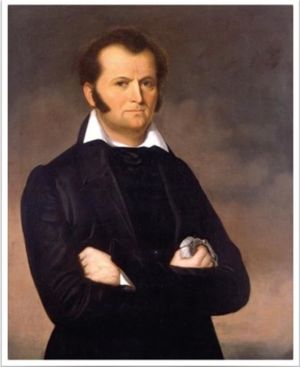 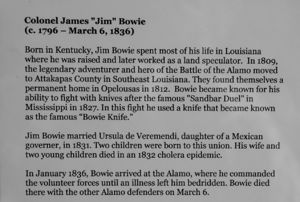 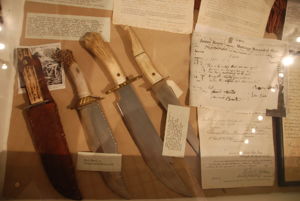 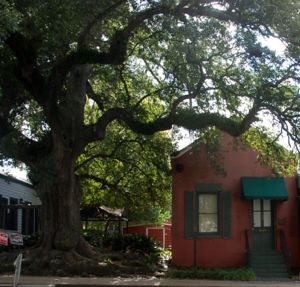 Leave a message for others who see this profile.
There are no comments yet.
Login to post a comment.
Dan Sparkman
He should be one of the Prominents! Also, place of death should read "Republic of Texas" instead of just "Texas."
posted Mar 06, 2019 by Dan Sparkman

I am featuring this profile next week for our EPOW, so I'll be making a couple tweaks to bring it up to WikiTree style guide standards. It looks great right now, so there shouldn't be too many changes.

Mary Richardson
Hello, this profile is in progress of a merge. Will you check (use edit) and correct James Bowie so that his father is listed as John Rezin Bowie to be FATHER of his children and Elvira Catesby Jones to be the MOTHER of children? Thank you ~Mary
posted Nov 15, 2015 by Mary Richardson

James is 25 degrees from Ludwig Kraayenbrink, 15 degrees from Henry VIII of England and 27 degrees from Ferdinand von Zeppelin on our single family tree. Login to find your connection.