Ray Douglas Bradbury was born 22 August 1920 in Waukegon, Illinois to Leonard Bradbury and Ester Mjöberg, an event he says he remembered, claiming a total recall of his entire life. Ray discovered science fiction around age 8, and lifelong endeavor was ignited. At the same time, he found his imagination running away with him, as he saw all the many ways life as he knew it could end suddenly, as it did in so many of the stories he was reading. He never attended college, but claimed he used the library, spending hours there at a time, instead.[1][2][3]

Ray's fear lived on into his adulthood. He refused to drive a car or fly, relating the decision to witnessing a fatal automobile accident as a child. He insisted he wasn't afraid of machines or robots, but rather the humans controlling them without understanding the immense power they wielded.[3]

Ray was a world renowned science fiction author, penning novels, poetry, short-stories, and screenplays. He cited Ernest Hemingway and Thomas Wolfe as his literary influences. He wrote every day in the basement of his home in Los Angeles. Initiation of his drive came from a chance encounter with a carnival magician at age 12 who encouraged him to live forever, which Ray realized could happen through writing. He sold his first story in 1941. He was unable to afford his own telephone or typewriter, so he had calls directed to the gas station across the street and he rented typewriter time at UCLA for dimes, carrying bags of the coins with him.[3]

Even though he is best remembered for his contributions to the science fiction world, he wrote across genres. His breakthrough moment was in 1950 with the release of "The Martian Chronicles", political satire as much as science fiction. The stories went on to be published in more than 30 languages, made into a TV series, and later served as inspiration for a computer game. He followed up with "Fahrenheit 451" which again commented on things he was observing in reality within the backdrop of science fiction. Much of his writing anticipated realities known now like smart phones and electronic surveillance.[3]

In 2007, he received a special Pulitzer Prize citation "for his distinguished, prolific and deeply influential career as an unmatched author of science fiction and fantasy.' His other honors included an honorary National Book Award medal for lifetime achievement, an Academy Award nomination, and an Emmy award. In addition, Apollo astronauts named a crater on the moon "Dandelion Crater,' in honor of Ray's novel, "Dandelion Wine,' and an asteroid was named 9766 Bradbury in his honor.[3]

Ray was described as blunt and gruff, while friendly and talkative, with a booming, distinctive voice. He was generous with his time given to readers and fellow writers.[3]

Ray died June 5, 2012, after time in a wheelchair following a stroke. He was actively writing up until the time of his death. His wife of 57 years, Marguerite, had died in 2003. They had four daughters still living at the time of his death.[3] Ray was buried in Westwood Memorial Park, Los Angeles, California.[4]

Sponsored Search by Ancestry.com
DNA
No known carriers of Ray's DNA have taken a DNA test. 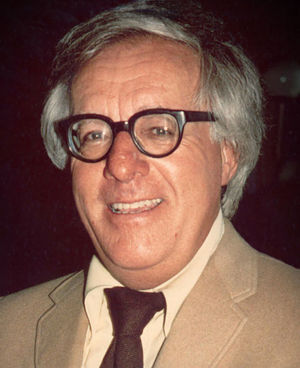 Leave a message for others who see this profile.
There are no comments yet.
Login to post a comment.
Sherie Morehouse
Along with Ray Bradbury here is a list of Authors/Poets/Writers who are my cousins: (I'll hold off on listing what cousin and how many times removed they all are.)

Abby (Brown) Glann
Hi there profile managers! We plan on featuring Ray as the Example Profile of the Week in the Connection finder on October 14th. Between now and then is a good time to take a look at the sources and biography to see if there are updates and improvements that need made, especially those that will bring it up to WikiTree Style Guide standards. A Team member will check on the profile closer to that date we'll feature it and make changes as necessary.