Christopher William Bradshaw-Isherwood was born at Wyberslegh Hall, High Lane, close to the Cheshire–Derbyshire border, England.[1] His birth was registered at Stockport, Cheshire during the 3rd Quarter of 1904.[2] He was baptized on 27 Sept 1904 at Disley, Cheshire. He was the child of Francis Edward Bradshaw-Isherwood and Kathleen Machell.[3]

Isherwood was a British-American writer. His most well-known works were semi-autobiographical short stories written about his experiences in Berlin, where he lived from 1929 until 1933. Bucknell states that he there "enthusiastically explored his homosexuality."[5] A 1939 short story, "Goodbye to Berlin," was the basis for the Broadway musical and movie, "Cabaret."[1] After leaving Germany, he traveled around Asia and across the United States, finally emigrating to the United States with W. H. Auden in January 1939. While Auden stayed in Manhattan, isherwood moved to Hollywood, where he became a devout Hindu and disciple of Swami Prabhavananda. He remained a Hindu for the rest of his life[5]

He was a pacifist, and during World War 2, he worked at at Quaker refuge in Pennsylvania.[1] Isherwood became a united States citizen in 1946.

"In 1953, he fell in love with Don Bachardy, an eighteen-year-old college student born and raised in Los Angeles. They were to remain together until Isherwood’s death."[5]

You can read Katherine Bucknell's complete biography of Isherwood at The Isherwood Foundation's [website.

ask our community of genealogists a question.
Sponsored Search by Ancestry.com
DNA
No known carriers of Christopher's ancestors' DNA have taken a DNA test. 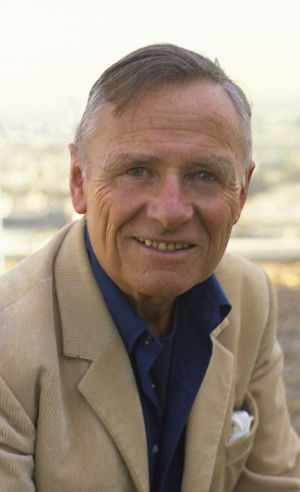 Christopher is 26 degrees from Katie Goodwin, 21 degrees from Wilbur Scoville and 20 degrees from Henry VIII of England on our single family tree. Login to find your connection.