Albert Andriesz Bradt is thought to have been born in Frederikstad, Norway.[1][2] No record of his baptism has been found in Norway. Early records for him call him Albert Andriess or Andriesz, and in some cases add the appellation "de Noorman," indicating his origin in Norway. His signature on his marriage record (in Amsterdam, in the Netherlands) gives his name as Albert Andriessen. The surname "Bratt" or "Bradt" was applied to the family later.

On Aug. 26 1636 in Amsterdam he joined Pieter Cornelisz from Munnickendam and Claes Jansz from Naerden in an agreement with the patroon for the erection of a mill in the colony. In this agreement he is given as tobacco planter, 29 years of age. He sailed with his wife Annetje Barents on the Rensselaerswyck, Oct. 8, 1636 [3] and appears first in the colony under date of April 17, 1637.

Soon after his arrival he left Pieter Cornelisz and established himself as a tobacco planter.

Patroon and Settlment namesake Kiliaen van Rensselear wrote back to Albert, unhappy with his Accvounting methods and his refusal to go through proper channels of submision of said accounts to his _______ Arent van Curler June 25, 1640[4]

Annetje Barents died before June 5, 1662, leaving him eight children of whom the third was born on the Rensselaerswyck during a storm and named Storm van der Zee. Albert Andriesz married the second time Geertruy Pietersz Vosburg.

04 MAR 1637 New Amsterdam, could not proceed up river as it was iced in yet

Albert and Annetie were both 24 years old when they married on 27 Mar 1632 at the Oude Kerk (Old Church), Amsterdam, the Netherlands. His occupation is given as sailor and he is assisted by Lourens Pieters his uncle. Annetje Barents is assisted by her mother Geesje Barents [8][9][10]

Some time after Annatje died (6 June 1662), Albert was married to Pietertie / Pietertje Jans. She died by January 1667. New Amsterdam court minutes for 29 January 1666/7 report that Pietertie (elsewhere called Pieterje) Jansen, "wife of Albert the Noorman, residing at Albania," had died in New Amsterdam, and give direction for the disposition of her goods to be sold in order to pay off her creditors. Johannes DeWit and Lodowyk Post were made curators of her estate. [11] On 5 February 1666/7, Symon Jansen Romeyn appeared on behalf of Ebert Benningh, son-in-law of Pietertie Jansen, late wife of Albert the Noorman, to request that goods in Pietertie's possession that belonged to Benningh should be returned to him. The court directed that the goods be sold, and the proceeds of the sale should be provided to Benningh.[12]

Albert subsequently married Geetrury Pieterse Coeymans - but on 24 Oct 1670, the governor gave an order for the separation of Albert Andriese and Geertruy Vosburgh because "strife and difference hath arisen between them. His children were all by his first wife." [13] Albert had wanted an annulment but instead they were granted a divorce.[14] He was ordered to offer support to her in the payment of 80 schepels of apples yearly, but avoided the payment by letting said apples rot on the ground under the trees.[15]

Albert and Annatje had at least eight children:

Besides the many descendants we have Normanskill - a 45+ mile creek with a reservoir near Guilderland named for Albert.[16]

Albert Andriessen Bradt, son of Andries Arentsen Bradt and Aefie (Eva), is thought to have been born on 26 Aug 1607 in Fredrikstad, Smaalenenes (now Ostfold, Norway), where Dutch merchants had established themselves. Albert was known as "De Noorman", which means "The Norwegian". Albert wed first Annatje Barentse van Rotmers (of Holmer, Norway?) on 11 Apr 1632 in the Old Saint Nicholas Church (Oude Kerk), Amsterdam, Noord-Holland, Netherlands. Their first two children were born and baptised in Amsterdam. They emigrated on the ship "Arms of Rensselaerswyck" which had a particularly long voyage, beginning at Amsterdam 25 Sep 1636, sailing from Texel on 8 Oct 1636, and not arriving in Rensselaerwyck, Nieuw Nederland (now NY) until 7 Apr 1637. With them traveled Albert's brother Arent Andriessen.

He was married to Geertruy(t) Pieterse Coeymans as his third wife.

Note: Modern Albany was founded as the Dutch trading posts of Fort Nassau (New Netherland) and Fort Orange in 1624. The fur trade brought in a population that settled around Fort Orange and founded a village called Beverwijck. The English took over and renamed the city Albany in 1664. - BdFM

All we really know about this ancestor, is that his christian name was Andries, based upon the fact that his two sons bore the patronymic "Andriessen" (son of Andrew). We do not know Andries' own patronymic, and he most likely never had a surname at all. ANDRIES, then, would be this forefather's Dutch christian name - "Anders" in Norwegian -, both meaning "Andrew" in English. BRADT is the surname that his two sons began using a quarter of a century after their arrival in the Dutch colony Nieuw Nederland (now New York). The use of the Bradt surname for their father Andries is therefore anachronistic. ARENTSEN, also spelt ARENTSE, ARENTS, ARENTSZ, is widley held to be this man's patronymic, though there are no known sources to substantiate this claim. The patronymic was used in the Netherlands itself by most countryfolk in stead of the surname up till the reign of Napoleon Lodewijk in the nineteenth century. It was used in 17th century Nieuw Nederland as well, and up till the nineteenth century in Dutch areas of New York, often with the christian name only, often in combination with the christian name and surname. Earlier on, the women had their own form of the patronymic ending in "-dochter", meaning "daughter". The patronymic was also used instead of the surname in Scandinavia, well into the nineteenth century. In Iceland people even today bear the corresponding male or female patronymic only, having no surnames whatsoever. The type of patronmyc that became popular amongst the Dutch, having the ending -sen, -se, -s, or -sz, was itself a shortening of the original, longer male patronymic ending in -szoon. Thus ARENTSZOON, meaning ARENT'S SON, from which ARENTSEN, ARENTSE, ARENTS and ARENTSZ all derive. BdFM

Aefie (Aeffie, Aafje, Eva) was supposedly born in 1584 in Frederikstad, Smaalenenes (later known as Ostfold, Norway). Aeffie was wed to Andries Arentsen Bradt / Bratt before 1607. The patronymic "Pieterse" and the surname "Kinetis", often attributed to her, are false. Aefie and Andries had at least two sons: Albert Andriessen Bradt, born in 1607 in Frederikstad, died 1686 near Albany, NY; and Arent Andriessen Bradt, born in 1618 in Frederikstad, died in 1662 in Beverwyck, Nieuw Nederland (now Albany, NY). Aeffie herself might have died at Beverwyck, Nieuw Nederland (New Netherland), which did not become Albany, New York until 1664 when the British captured and renamed it. But it is much more likely that Aefie (Eva) and her husband Andries (Anders?), parents of Albert and Arent, never left Europe. In reality, nothing is known of this woman at all, except that her given name was very likely Aefie (Eva), as that is the name that both Albert and Arent gave their eldest daughters. But the patronymic Pieterse, and the surname Kinetis, and all dates attributed to her, (as well as her supposedly having been a Mohawk Princess !) are sheer invention, and have been debunked by Cynthia Brott Biasca in her article <Jacques Hertel and the Indian Princess> in the New York Biographical and Genealogical Record, Vol. 128, number 2, pp. 91-97. https://familysearch.org/photos/stories/1574886 En fin, one can safely presume that Aefie's husband, the father of Albert and Arent Andriessen Bradt, was indeed called "Andries" (or "Anders" - the Norwegian equivalent thereof), as both sons bore Andriessen as their patronymic. The surname Bradt seems not have been in use till a quarter of a century after the two brothers had settled in the Dutch colony Nieuw Nederland, now New York. The maiden name of Eva/Aefie is unknown: it was not Kinetis. I have removed the surname KINETIS from my own gedcom files. 28 Feb 2015 - BdFM 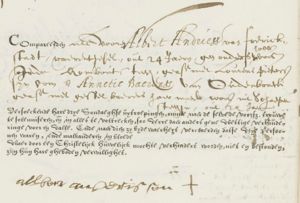 Steven Mix
Bradt-242 and Bradt-2 appear to represent the same person because: This newly created duplicate needs to be merged into the NNS PPP. No tree conflicts. Thanks!
posted Apr 17, 2015 by Steven Mix

Timothy Wilder
For a copy of the marriage registration of Albert and Annetie see: http://www.bradtfamilysocie.pages.qpg.com/id38.html
posted Apr 19, 2014 by Timothy Wilder

we are currently working on a special project "New Netherland Settlers" and I got a match with your profile on one of the passengers of the 'Rensselaerswyck'. I have added the project badge and category to the profile.

If you'd like to know more about the project or would like to help, please check out our project's page on http://www.wikitree.com/wiki/Project:New_Netherland_Settlers