August was the first of the Braetigam children to grow up there. From 1860 to 1870, he was listed as a student at Grape Creek School (later Luckenback School). By the time he was 18 he had trained and become a seasoned blacksmith and wheelwright.[2] He was offered the opportunity to work as a blacksmith for a cattle drive going to Dodge, and took the opportunity for adventure. By Kansas, he had decided that the life of a drover was not for him, and he and another man set off for the west by way of the Dakotas and Montana.

August made it to the Sacramento area of California where he set up shop in Gridley Station. It was there that he met Nellie Christine Haddock. They married on Oct. 3, 1874 in Marysville, Yuba Co., and their first and only child Annie [later Annie (Braeutigam) Pampell] would be born at Gridley Station.

In 1885, the family moved to Kerrville, where August opened a second blacksmith shop on Water Street. 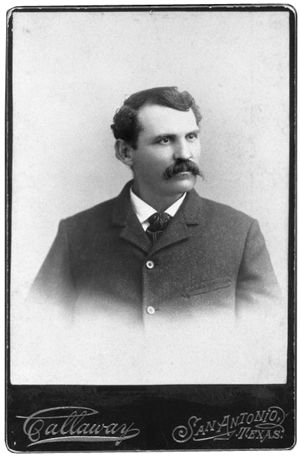