Pedro was the youngest son of João IV King of Portugal and his wife, Louise de Guzman. When his father died in 1656 the throne was inherited by Pedro's older brother, Afonso, then aged 13 and under the regency of their mother until in 1666 he banished her to a convent and took power. Two years later Pedro succeeded in having his brother declared incompetent and himself chosen as King. Afonso's marriage to Marie Francoise, daughter of Charles-Amédée of Savoy and his wife, Élisabeth de Bourbon, was annulled and Pedro married her himself.

Marie Francoise died in 1683 and Pedro took as his second wife Maria Sophia of Neuburg, daughter of Philipp Wilhelm Wittelsbach and his wife, Elisabeth Amalie of Hessen-Darmstadt who bore him eight children.

Is Pedro II your ancestor? Please don't go away!

ask our community of genealogists a question.
Sponsored Search by Ancestry.com
DNA Connections
It may be possible to confirm family relationships with Pedro II by comparing test results with other carriers of his Y-chromosome or his mother's mitochondrial DNA. Y-chromosome DNA test-takers in his direct paternal line on WikiTree: 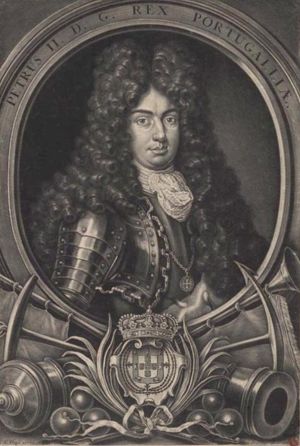 Pedro II is 19 degrees from Laurie Giffin, 32 degrees from Toni Morrison and 7 degrees from Henry VIII of England on our single family tree. Login to find your connection.