In the history of post-colonial Latin America no person has held power so firmly and for so long as did Pedro II as emperor of Brazil. Called to the throne in 1840 at the age of 14, Pedro II devoted himself for the next half century to transforming Brazil into a functioning nation-state, applying “all my forces and all my devotion to assuring the progress and prosperity of my people.” This is the first full-length biography in 60 years, and the first in any language to make close use of Pedro II’s diaries and family papers.

Resourceful, patient, cautious, and above all persevering, Pedro II acquired undisputed control of public affairs and was indispensable in establishing Brazil’s viability as a nation. By his personal character, behavior, and interests, he created a model of citizenship that commanded acceptance at home and respect abroad. A friend of Longfellow, Emerson, and Oliver Wendell Holmes, he was the first foreign head of state to visit the United States.

By the 1880s, the rising generation had so internalized the model of Pedro II that it greatly resembled him in outlook and culture. Ironically, his success was such that the ruling circles took Brazil’s existence as a nation for granted and viewed him as old-fashioned and irrelevant to the nation’s needs. In effect, he had made himself redundant. Unable to change his ways of ruling, weakened by illness, and increasingly marginal to public affairs, he was overthrown by a military coup in 1889. Exiled to Europe, he died in Paris two years later.

Is Pedro your ancestor? Please don't go away!

ask our community of genealogists a question.
Sponsored Search by Ancestry.com
DNA Connections
It may be possible to confirm family relationships with Pedro by comparing test results with other carriers of his Y-chromosome or his mother's mitochondrial DNA. Y-chromosome DNA test-takers in his direct paternal line on WikiTree: Mitochondrial DNA test-takers in the direct maternal line: 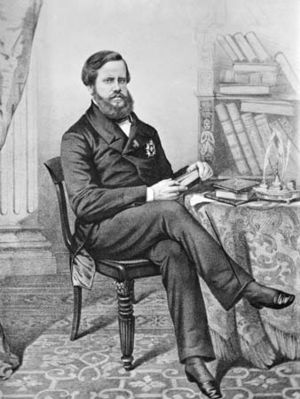