Braxton Bragg was born in Warrenton, North Carolina, one of the six sons of Thomas and Margaret Crosland Bragg. One of his older brothers was future Confederate Attorney General Thomas Bragg.

Bragg visited Evergreen Plantation in Thibodaux, Louisiana, after the Mexican-American War, where he met 23-year-old Eliza Brooks Ellis, known to her friends as Elise, a wealthy sugar heiress. They were married on June 7, 1849.

He was a principal commander in the Western Theater of the American Civil War. He commanded the Army of Tennessee for 17 months, leading them to several defeats and losing most of the state of Tennessee. Throughout these campaigns, Bragg fought almost as bitterly against some of his uncooperative subordinates as he did against the enemy, and they made multiple attempts to have him replaced as army commander. The defeat at Chattanooga was the last straw, and Bragg was recalled in early 1864 to Richmond. After these losses he became military adviser to Confederate President Jefferson Davis.

On September 27, 1876, Bragg was walking down a street with a friend in Galveston, Texas, when he suddenly fell over unconscious. Dragged into a drugstore, he was dead within 10 to 15 minutes.

Is Braxton your ancestor? Please don't go away!

ask our community of genealogists a question.
Sponsored Search by Ancestry.com
DNA Connections
It may be possible to confirm family relationships with Braxton by comparing test results with other carriers of his ancestors' Y-chromosome or mitochondrial DNA. However, there are no known yDNA or mtDNA test-takers in his direct paternal or maternal line. It is likely that these autosomal DNA test-takers will share some percentage of DNA with Braxton: 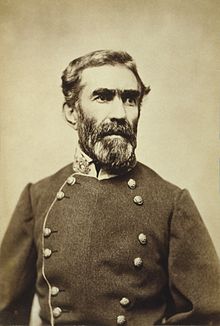 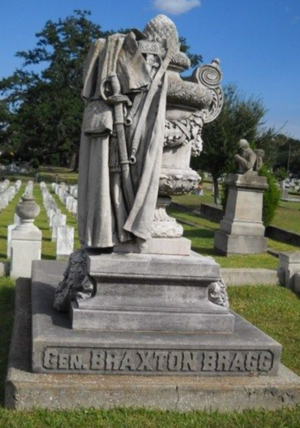 Kelly Barnes
Bragg-606 and Bragg-1949 appear to represent the same person because: I searched for Braxton Bragg and didn't find him, so I started a new profile. After I found this through the Confederate generals category. My mother's maiden name is Bragg and I am distantly related to General Bragg.
posted Sep 09, 2018 by Kelly Barnes

Cathryn (Hallett) Hondros
I have added a link to this profile from the profile of 2d Lt. Alonzo Chubb of the 105 OVI. Bragg directed that a letter be written informing Union military leaders that Chubb, Cap. Canfield and 1st Lt. Tourgée were being held. This was in retaliation for three civilians being held by the Union.
posted Sep 23, 2014 by Cathryn (Hallett) Hondros