There is NO EVIDENCE to suggest that his wife was a Fowke. Elizabeth Fowke, daughter of Chandler Fowke, and granddaughter of Gerard Fowke, married ZACHARIAH Brazier/Brasseur in 1759 in Virginia. This Zachariah is not provably related to Robert, the Huguenot immigrant to Virginia c. 1635. Note the names of this Elizabeth's father and grandfather; the unknown wife of Robert Brasseur/Brashear has been given an identical pedigree with the dates shifted back a century.

Please do NOT add parents for this man from the "de Jocas" family - they were NOT his family; the Allemand de Jocas family or "Pierre de Brassier de Jocas" family were Roman Catholics whereas Pierre Brasseur's family were French Huguenots (Protestants). They were NOT the same family although they may have been distant cousins, they were not this man's parents. Contact the Huguenot Migration Project for details. Chet Snow Added 26 Jan. 2017.

The Brasseur family were French Huguenots, dissidents against the Catholic Church, searching for freedom from religious persecution by immigration to Holland, England, then America before 1635. They eventually settled in Calvert County, Maryland, on the western shore of the Chesapeake Bay. Their surname has been spelled Brasseur, Brasher, Brashear (s), Boshears, Brashier, Brasier, Brazier, Basher, Bashier and even Bradshaw. The original is thought to have come from the French word "Bras" meaning arm (a part of the body) and "Sieur" meaning Lord or Knight. Another, less noble, interpretation of the name's origin is that a "brasseur" in France is someone who brews beer and ale.

Most American Brashears and variants of the name descend from Benois Brasseur's sons, Robert, Benjamin and John. However, there appears to be another branch that entered the American Colonies through the New England area.

During the 1630s, the Anglican Church was the dominant religion in colonial Virginia. That colony was hardly more tolerant of Puritan Dissenters or Calvinist Huguenots than had been the Roman Catholics in France (from which the Brasseur family fled, seeking religious freedom). So immigrant Robert moved his family, including son Benois, from Isle of Wight County, Virginia Colony, to less-populated Nansemond County and patented 600 acres in Nansemond Co. in 1636 and 1638. At least two of Robert's children became Quakers - John and Margaret. Eventually, in 1658, the family left Virginia for the much-more open and tolerant colony of Maryland.

On October 6, 1640, Robert acquired 100 acres in Upper Norfolk County, Virginia. Two others are mentioned in the transaction, Peter Besairdier and Reene Besairdier[1].

There are generally two versions of the background of Benois Brasseur before coming to America. The Brasseur Family history has been most thoroughly researched in recent times and published by Charles Brashear in two volumes titled "A Brashear(s) Family History ". The origin and background of earlier versions of the origin of Benois Brasseur are thorougly discussed in the new family genealogy in a preface, entitled "The deBrassier Nonsense". Please read this discussion of Robert's possible origins at:[2] before adding undocumented parents for him.

In some [older] genealogies, a Roman Catholic Frenchman from Carpentras: Allemand Brassier de Jocas, is listed as a possible ancestor of Benois Brasseur (the Huguenot emigrant ancestor to America), but we can now document that Benois’ father was named Robert Brasseur, who was born about the same time as Pierre Brassier de Jocas, Allemand’s son. Allemand de Brassier was not Robert Brasseur's father. Robert and his son Benois Brasseur arrived in Virginia in about 1635, when Robert already had seven children, the oldest being Benois. Some were born in France before 1628, when the family is thought to have fled to Kent, England; others were born at the Isle of Thanet, in Kent. The remainder were born in Virginia. Within a few generations their French surname "Brasseur" had been Anglicized to "Brashear" or "Brashears".

Notes About Brasseurs who became Quakers

Thomas�Jordan her husband "Departed this Life, ye 8, 10mo 1699, on ye sixth day of�the week." He also suffered persecution at the hands of authorities, being�imprisoned six weeks for "being at a meeting at his own house" but was�released by order of Kings Proclamation. Of the Jordan family too much�can not be said, as they seem to be from beginning to end a family of great�worth, true, strong, public spirited, every where holding places of honor,�and public offices, they have blazed a way for their good name through all�generations, since the first intrepid adventurer Samuel Jordan set foot on�American soil, down to the present day.��My own husbands mother being of this splendid family, I feel that I can�not say too much about them, she herself being a fine example of all that�good womanhood stands for in this life.

Sponsored Search by Ancestry.com
DNA Connections
It may be possible to confirm family relationships with Robert by comparing test results with other carriers of his Y-chromosome or his mother's mitochondrial DNA. However, there are no known yDNA or mtDNA test-takers in his direct paternal or maternal line. It is likely that these autosomal DNA test-takers will share some percentage of DNA with Robert: 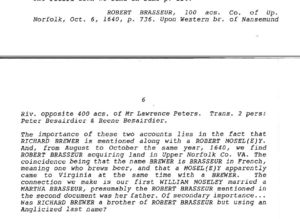 I don't know if there is any connection, (although common sense would tell you there is a connection) but a Charles Brasseur brought a Symon Iran in 1653 to Northampton in the Virginia colony.

T Stanton
There's considerable conflicting (or at least confusing) information in this profile about when he probably arrived, where he arrived, etc. This appears to be from merges without clean-up. Can one of the PMs or the Huguenot Migration Project undertake cleaning it up and adding appropriate info from The Brashear Family History?
posted Oct 30, 2018 by T Stanton
Bruce Runk
Brassieur-17 and Brasseur-19 appear to represent the same person because: Birth and death dates and locations are almost the same and the spouses appear to be the same (Fowke-5 and Fowke-191, which would also need to be merged). Daughter Martha (Brasseur-11 and Brassieur-16) also appears to be duplicated with possibly two marriages (William Moseley and George Taylor). There is another set of profiles that appear to duplicate this family (Brassieur-14 and Fowke-115). This pair has a daughter Mary (Brassieur-13) that may be a duplicate of Brasseur-15.
posted Jan 12, 2016 by Bruce Runk

James Evans
Brasseur-19 and Brasseur-87 appear to represent the same person because: Same general dates and places of birth and death. Brasseur-87 doesn't have any additional relationship data so this won't effect any other profiles. Please consider merging.
posted Dec 07, 2015 by James Evans

Jerry Murdock
Thank you, Chet. This is my major problem with the collaborative format. Wishful thinking becomes fact.
posted Nov 22, 2014 by Jerry Murdock