This profile is part of the Bray Name Study.

Edward BRAY's wife and children were Quakers. Edward BRAY (who married Sarah MAYNARD), had a brother Henry, and a sister Elizabeth. Some have claimed that Edward's father was named Edward, while others say it was Henry. More evidence points to Edward's father being named Henry Bray "Gentleman Henry Bray". See Jacque Hoggard's post Re: Chatham and Surry Brays [1]

Marriage 1 Sarah MAYNOR b: ABT 1733 in of , Monocacy Hundred, Prince :George's, Maryland, USA

There have been a variety of dates given for their marriage: in 1742 in Fairfax Friends, Waterford, Fairfax County, Virginia, or as 27 Oct 1759 in North Carolina, also given as about 1750 in Virginia.[4]

Conflation of this profile and the son of Henry, Edward's brother at Find a Grave: https://www.findagrave.com/memorial/55998977/edward-bray 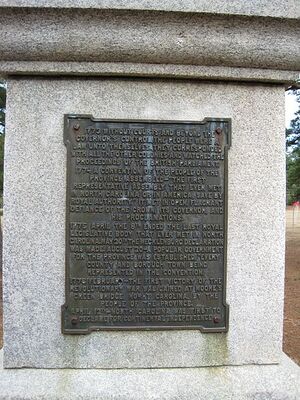 Madge (Franks) Gentry
My name is on here as profile manager, but I didn't put the biography or other information on here, if anything is wrong, I don't know what it is because I haven't done any of the posting.
posted Jun 30, 2019 by Madge (Franks) Gentry

P Kreutzer
You may have two Edward Bray's mixed up, there were two Edward Bray's one the brother of Henry and one the son. looking at the bio section you have parents: Henry Bray and Rogers, that would be the Edward who is the brother of Henry, and wasn't married to Sarah Maynard. The Edward who was the son was born abt 1735.
posted Jun 29, 2019 by P Kreutzer

SJ Baty
I see that there is a Bray One Name Studies page and I'd like to add some work there on this line. It is interesting that we have a mix of veterans and Quakers in this line - certainly some philosophical differences. If anyone objects to the sticker, please feel free to remove it.
posted Mar 10, 2019 by SJ Baty

SJ Baty
Indeed, he was not a Quaker. He and his brother were Regulators: Veterans of the War of the Regulation, and both participated in the Battle of Alamance.
posted Feb 17, 2019 by SJ Baty