NOTICE: this profile is protected by the Acadian Project because of frequent duplication, variant name spelling, attempts to add unsourced parents or is an historically important person, in the Top 100 highly viewed Acadian profiles. Please contact the Acadian Project before making any substantive changes. Thanks for helping make WikiTree the best site for accurate information.

Parents and Precise Origin Unknown. Renée Breau's parents are unknown at this time. Exact location in France of her birth and marriage also not known. Some trees and Find A Grave name Renée Breau and Marie Renaulme, but there are no sources or citations and therefore her parents and precise origin in France are considered to be unknown (as reported in the sources cited below).

The family likely arrived in Acadia after the baptism of their daughter Andrée in France, in August 1646, and before the birth of their 3rd daughter Françoise estimated in 1652, in Acadie.[2]

Recorded on the Port-Royal Census of 1671 are the following:[3]

In 1654 Port-Royal was captured by Robert Sedgwick, who led 300 British soldiers and volunteers.[5]

"The [French] soldiers at Port-Royal, who numbered about 130 … put up a brief defence against Sedgwick. Setting up an ambush between the landing site of the English troops and the fort, the Frenchmen fired on the attackers but proved no match for the experienced Roundheads. The French soon "took their heels to ye Fort." On August 16 the fort surrendered... Sedgwick granted honourable terms, allowing the defenders to march out of the fort with flags flying, drums beating, and muskets at the ready. The soldiers and employees working at the fort were offered transportation back to France and given enough pelts to cover their wages."[6]

Although the commander of Port-Royal left for France, most Acadians, including the Brun family, remained in Acadia. They were permitted to retain their land and belongings and were guaranteed religious freedom.[6] Dunn describes life in Acadia during the 16 years of nominal British rule:

"During the years of British rule, most of the Port-Royal population moved upriver away from the town. Using the agricultural practices initiated under D'Aulnay, the Acadians dyked and cultivated extensive salt marshes along the river and raised livestock. Through necessity, residents had reached an accommodation with New England traders who had become their sole source for the goods that they could not produce themselves... New England traders exchanged their goods for Acadian produce and furs... There were seventy to eighty families in the Port-Royal area in 1665."

By 1671 the British had ceded Acadia to France and French settlement resumed.[7] Around 1671[8], the family homestead had five arpents[9] under cultivation and they had 10 cattle and 4 sheep. Their farm was likely situated several miles from the fort on the north bank of the Dauphin (Annapolis River) to the east of the Belleisle Marsh.[1][10]

Sometime before the 1678 Census Renée died, likely at Port-Royal.[11]

Some assertions by Massignon have been disproved: 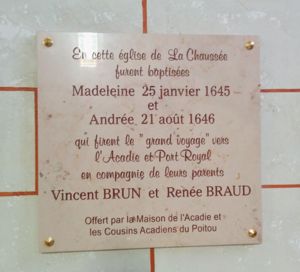 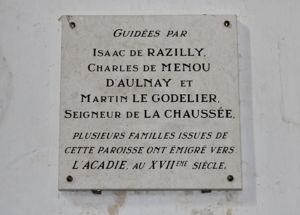 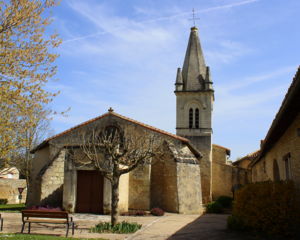 Gisèle Cormier
Breau-664 and Breau-4 appear to represent the same person because: Same date of birth, same husband, same daughter Françoise. She died before 1678 because Vincent was listed as a widower on a census that year.

There are no reliable sources proving the identity of her parents so they are considered to be unknown and need to be removed. Thanks!

Cindy (Bourque) Cooper
Brot-14 and Breau-4 appear to represent the same person because: Same last name phonetic spelling. Same spouse. No dates on Brot-14 to conflict. Same daughter in proposed merge.
posted Mar 03, 2021 by Cindy (Bourque) Cooper
Peter Geary
In the profile, the marriage to Vincent Brun took place about 1644 in France, the birth of son Andrée Brun in France on 21 Aug 1646, the birth of Françoise in Acadia about 1652, and the arrival to Acadia between 1636 and 1637.

From her husband Vincent's profile research notes, "Between 1636 and 1637, the family likely arrived in Acadia. Note: this statement hasn't been verified and is probably not correct"

With the 1636/7 statement of arrival unproven, should it be left as a research note and replaced in the bio with an estimated migration date of being after 21 Aug 1646 and before 1652?

Gisèle Cormier
Thank you Peter for spotting this. Corrections have been made as suggested.
posted Jun 18, 2020 by Gisèle Cormier

Lianne Lavoie
I removed her parents in preparation for the merge with Breau-4. It looks like this profile gets two people with the same name mixed together.
posted Aug 26, 2018 by Lianne Lavoie

John DeRoche
This profile needs some TLC by somebody in the know. What is the evidence for identifying her parents? Perhaps the documentation exists, but all I see on the Internet is repeated claims without citations. Same for husband Vincent Brun.
posted Aug 22, 2015 by John DeRoche
[Living Gauvin]
Marriage or Union