Madam C.J. Walker left her mark on history as an African-American business woman, entrepreneur and philanthropist whose beauty products empire led her to become the first self-made female millionaire (according to The Guinness Book of Records). Born Sarah Breedlove on December 23, 1867 according to her passport.[1], she was the daughter and fifth child of former slaves and lived a childhood touched by poverty and despair. In 1878 she lost her parents to yellow fever, forcing her and her sisters to move to Vicksburg. Upon arriving in Vicksburg, they took on jobs as maids.

When Sarah was fourteen she married Moses McWilliams. They had Leilia together. She became a widow at the age of 20, and quickly remarried a gentleman by the name of John Davis in St. Louis, Missouri. [2] When their relationship failed, she married for a third time to Charles Joseph Walker and changed her name to "Madam C.J. Walker".

Madam Walker went through many obstacles in her life but managed to become a successful woman entrepreneur - founding the Madam C.J. Walker Manufacturing Company to produce and sell hair care products and cosmetics. She states to have built her company on an actual dream she had where a large African-American man appeared and gave her a formula for curing baldness. With the help of her husband Charles Walker [3] and daughter Lelia Walker, Madam C.J. Walker initially sold her products door-to-door; later moving her operations from St. Louis to a new industrial complex in Indianapolis.

Madam C.J. Walker died at her home at the age of 51 on Sunday, May 25, 1919 from complications of hypertension (high blood pressure). She is buried at Woodlawn Cemetery in Bronx, Bronx County, New York.[4]

When she died, she was considered to be the wealthiest African-American woman in America. She was the first self-made millionaire woman in the United States. [5]

Her daughter Lelia succeeded her as president of the C. J. Walker Manufacturing Company.

"Don't sit down and wait for the opportunities to come; you have to get up and make them." -Madam C.J. Walker

Madam C.J. Walker's story has always deserved an expansive loom on which to weave the threads of her legendary life with the broad themes and major events of American history. Quoted from On Her Own Ground [novel]

ask our community of genealogists a question.
Sponsored Search by Ancestry.com
DNA
No known carriers of Madam C. J.'s DNA have taken a DNA test. 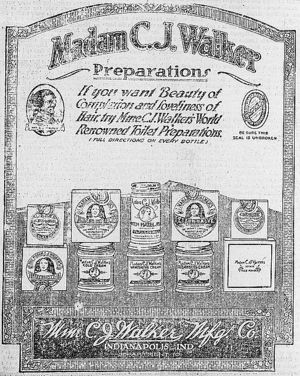