[1] Biography of Henry Briggs - MacTutor History of Mathematics - University of St Andrews, Scotland-School of Mathematics and Statistics-Documentation of birth/death dates and places of those occurrences-NOTE-He died while at Merton College and was buried there, in the choir of the chapel

[4] "Biographia Britannica: Or, The Lives of the Most Eminent Persons who Have Flourished in Great Britain and Ireland, from the Earliest Ages, Down to the Present Times: Collected from the Best Authorities, Both Printed and Manuscript, and Digested in the Manner of Mr. Bayle's Historical and Critical Dictionary", pps 979-982-Great Britain

Working with famed mathematician, John Napier and using John's ideas regarding logarithms, Henry produced logarithm tables which all mathematicians use today. He is considered the man most responsible for scientists' acceptance of logarithms. He also created logarithm tables to enhance the study of astronomy and navigation. Additionally, he was considered a most distinguished mapmaker. Overall, he was and still is referred to as "Henry Briggs, the Great Mathematician".

[7] Biography of Henry Briggs - MacTutor History of Mathematics - University of St Andrews, Scotland-School of Mathematics and Statistics-Documentation of achievements in mathematics with acknowledgement of brother, Richard

[8] The History of Computing Project-Henry Briggs

[9] Biography of Henry Briggs - MacTutor History of Mathematics - University of St Andrews, Scotland-School of Mathematics and Statistics-He was the first Professor of Geometry, at Gresham College, London, holding this position for 23 years. Then, in 1619, he became the Savilian Professor of Astronomy at Oxford University, Oxford, England, until his death

[13] University of St Andrews, Scotland-School of Mathematics and Statistics-Less than 300 mathematicians have lunar features, mostly craters, named after them. Henry Briggs is one of those mathematicians. Additional information can be found here [14] Wikipedia-Briggs (crater)

[15] "A Declaration of the State of the Colony and Affaires in Virginia (1622)", an official publication of the Virginia Company of London, addressing the "an assault by Virginia Indians on the English plantations along the James River that took place on March 22, 1622." This unjustified and barbaric attack by the Indians, preceded by 8 years of peace, between the Jamestown colonists and the Indians, "and the company's response to it, marks a point at which colonists, no longer dependent on the Indians economically, began in earnest to kill them and seize their land." The publication also contained a treatise by the mathematician Henry Briggs about the supposed Northwest Passage through Virginia to the South Sea.

[16] Oxford University Press-Documentation that Henry Briggs was the auditor of the Virginia Company of London, beginning in April, 1619

[18] "History of the Virginia Company of London: With Letters to and from the First Colony, Never Before Printed", PREFACE xiii, by Edward Duffield Neill

[19] Wikipedia-London Company (Virginia Company of London) The Virginia Company of London was a stock-holding company, "established by royal charter by King James I" looking to make a profit by helping to fund expeditions and colonizations, to and in the United States, primarily, Virginia Colony. It was founded in 1606 but by 1621, the company was so severely in debt that in 1624, the king called for its dissolution, while declaring Virginia, "a royal colony", under his jurisdiction.

Speculation that he had two sons

[20] "Southside Virginia Families, Volume 1", page 104, by John Bennett Boddie-Notation that Henry Briggs was actively involved in the Virginia Company of London and had 2 sons: Henry II, who immigrated to Virginia, and Thomas, who remained in England. Other distinct documents attest that Henry Briggs, Mathematician, played a role in the Virginia Company of London so it's very feasible that he fathered these 2 sons

[21] Wikipedia for Henry Briggs (mathematician)-Documentation that he had two sons: Henry, who left England to go to Virginia, and Thomas, who remained in England 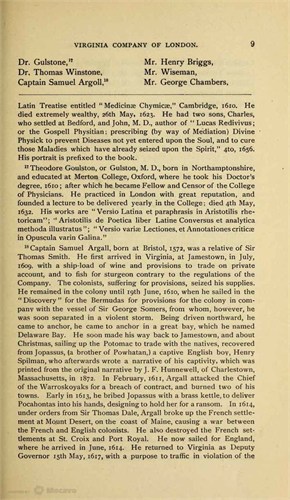 C. Mackinnon
ODNB entry does not mention wife or children which the articles usually do. His will dated 16 November 1629 might help clarify the situation.
posted Nov 08, 2018 by C. Mackinnon

Henry is 14 degrees from Jaki Erdoes, 15 degrees from Wallis Windsor and 12 degrees from Henry VIII of England on our single family tree. Login to find your connection.