Jacob was the son of Gabriel Brown and Mary Keene.

He married Ruth Gordon on August 14, 1760 in South Carolina.
They were the parents of:

Jacob and Ruth were apparently estranged by 1771, when Jacob came to the Nolichucky where he established a trading post and served as gunsmith and blacksmith, skills which the Indians appreciated. There is no indication Ruth or any of the children were with him.

At first Jacob leased the land from the Cherokees, later purchasing it. Tradition has long held that the agreement took place under the present day "Brown Tree" on the Nolichucky; however, court records show that it took place at John McDowell's house, Pleasant Garden, near the present day Morgantown, NC. Jacob's girl friend, Anne "Nancy" Henderson, who accompanied him to Nolichucky was present at the signing and described it. Jacob tried to provide for her by giving her a life tenancy in his land, which was then to go to his youngest son, John, but whe was not destined to keep it.

He was active in the affairs of the area from the beginning. When the Watauga Association was formed in 1772, there was a court of five magistrates who functioned as the legislative body. The records have been lost, but such eminent Tennessee historians as Samuel C. Williams and Robert Corlew have stated that Jacob Brown was probably one of the five. As Williams stated, "Brown's forcefulness and capacity entitled him that recognition..." He and John Carter were the two Colonels under Major Jacob Wommack to insure the safety of the area. In 1776 he was one of the Committee of thirteen, the legislative body, and, in that capacity signed the petitiion sent to NC in 1776 which reulted in the formation of Washingtion District in 1777. He was selected for the Grand Jury in 1778, many of the cases being accusations for treason against Tories in the area. He was a Captain in the Washington District/County Militia but was not called to active dury until 1780 when he served at the Battle of King's Muntain, commanding his company under John Sevier. His son, Jacob II who was fighting in his cousin Gabriel's SC company, saw his father and joined him. He and Jacob II also were with Sevier at the Battle of Boyd's Creek, where he was referred to as Colonel. He was a Second Major in the Franklin Government.

After Jacob died in a hunting accident 28 June 1785, Ruth and her four sons came from SC and claimed his estate, including the land deed to Nancy Henderson. In 1802, Ruth won all of it through the court. She died 9 Oct 1810.

Jacob is the founder of Brown's Settlement.

He was a Captain at Kings Mountain in the Revolutionary War.

There is a plaque in his honor on the Washington County Court House in Jonesborough, Tennessee

Daughters of the American Revolution Record 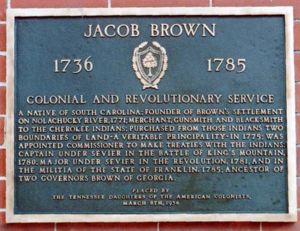 Mags Gaulden
The National Society of the Daughters of the American Revolution (DAR) has asked that we not use or link to their proprietary information without prior written approval. This includes:

the DAR insignia the DAR logo all DAR Ancestor numbers their public database.

Colonel Jacob Brown Sr. participated in the American Revolution
. If your ancestor has civil or patriotic service, please use