Robert Browning was an English poet and playwright whose "mastery of dramatic monologue made him one of the foremost Victorian poets. His poems are known for their irony, characterization, dark humor, social commentary, historical settings, and challenging vocabulary and syntax."[1]

He was born 7 May 1812 at London, the son of Robert Browning and Sarah Wiedemann. He was baptized 14 June 1812 at Walworth Locks Fields Chapel York Street, Independeso, Southwark, in Surrey.[2] "Robert, son of Robert Browning and Sarah Anne his wife, was born in the parish of St. Giles, Camberwell, on the 7th of May, 1812, and was baptized on the 14th day of June, 1812, by me, -- George Clayton, Minister."[3]

On 12 September 1846 he married another poet, Elizabeth Moulton Barrett at St. Marylebone, Middlesex, England,[4] and they moved to Florence, Italy. "By the time of her death in 1861, he had published the crucial collection Men and Women. The collection Dramatis Personae and the book-length epic poem The Ring and the Book followed, which made him a leading British poet."[5]

In 1861 his wife died and was buried in Florence, after which Robert went to London, England.

In 1878 he moved to Venice, Italy where he resided with his son and his sister Sarianna, until his death on 12 Dec 1889. His remains were taken to London, England and buried in Westminster Abbey, in the Poet's Corner, where a white marble slab, with the simple inscription, "Browning" upon it, marks his last resting place.[6]

A comprehensive biography can be found online on Wikipedia here.

"Robert Browning, the greatest of modern English poets, and whose rank is but just below the greatest poets of all time, has died at Venice in this 78th year, probably of pneumonia, a victim of the unusual severity of the early winter in southern Europe."

"He was born at Camberwell, a suburb of London, in 1812, received his academic education at the London university, and went to Italy at the age of 20, being drawn thither by a strong predilection for the great medieval history of that country, so full of intense human action and passion. He lived in Italy, especially at that time in Lombardy and venice, for many years, delving in the libraries of the monasteries and in the records of history, living among the peasants also, and among the people of the towns whose importance and whose very names had been scarcely more than memories for hundreds of years."

"In his verses, "Parting at Morning," he expresses the keynote of his intellectual life, the only one in which there are incidents to record, when contrasting two types, he says: "And straight was a path of gold for him, and the needs of a world of men for me."

"It has been truly said that no traveler ever brought from Italy a larger intellectual harvest than Browning, and Italy remained the most beloved of lands to him. His first poetic writing was a narrative poem, "Pauline," which he has lately edited and included in his poetical works, although he did not value it. But his reputation as a poet began in 1835 with the dramatic poem "Paracelsus," in which he gave an ideal portraiture of the life purpose of the noted alchemist and charlatan, as he was commonly represented. This was a powerful study in psychology and marked Browning as a poet of rare and original mind, although it was not popular; it contained the principle on which he ever after worked, the getting at the inner soul of man, putting himself into the person of another, and working out the secret and profound motive of his life."

"His next publication was the drama "Strafford" which was put on the stage in London with Macready as Strafford. It was not successful as an addition to the acted drama. His "Sordello," an extraordinary poem in which his purpose was to present the development of a poet, was published in 1840; its subject was the Mantuan poet represented as greeting Virgil and Dante in the 6th canto of Purgatorio. In this the mysterious involution of Browning's peculiar style manifested itself so strongly that it was generally pronounced unintelligible, and has never had many lovers unto this day. The collection of poems which he entitled "Bells and Pomegranates" appeared in numbers between 1842 and 1846, It contained among the rest his, pathetic tragedy, "The Blot on the Scathcheon," which was, like "Strafford," produced on the stage with small success, but has within a few years been one of the noted pieces in Lawrence Barrett's repertory. "Colombe's Birthday," at first issued as "The Duchess of Cleves," was likewise brought out in a London theater, with Charlotte Cushman as the heroine. This has been measurably successful as a stage play. In 1849 appeared the first collection of Browning's poems, in Boston and London; in American he was at once recognized as a great poet. His "Christmas Eve and Easter Day" was published in 1850, and is remarkable for its revelation of his personal religious standpoint."

"Robert Browning's most popular and most attractive book, "Men and Women," consisting of 50 poems in the guise of dramatic monologs (a form which if he did not invent he made peculiarly his own) appeared in 1855, with the beautiful dedication in the poem 'One Word More," to his wife, Elizabeth Barrett Barrett, whom he had married in 1846. The union was one wonderful fitness and perfectness, and presents the most striking instance i literary history of two poets as husband and wife. They resided chiefly in Italy for the 15 years of their marriage, their home in Florence becoming the resort of all English and American men and women whom arts or letters drew to Italy. She died, in 1861, leaving one son, Robert Barrett Browning, who is an artist of considerable ability. In 1864 appeared "Dramatis Personae," a book resembling in character "Men and Women," and probably ranking next in general acceptance. In 1869 Browning published his greatest poem, "The Ring and the Book," in which he built up from the records of a trial for murder in Rotue, centuries before, a marvelous dramatic picture of life in his favorite form of monologues, giving the view of the story taken by each of the principal actors therein, by the advocates on either side, by the public opinion of Rome and finally by the aged pope before whom all passed in review. two very different writings were published by Mr. Browning in 1871, "Balaustion's Adventure," a recension of a Greek tragedy, set in a charming story of a singing girl; and "Prince Hohenstied-Sawngau, Savior of Society," a scathing satire on Louis Napoleon. "Fatine at the Fair" came out in 1872, and the next year the "Red Cotton Night-Cap County."

"Mr. Browning has lived in London much more since his wife's death than before, and has been a prominent figure in London literary society. He was always been a man of robust health and his death is a surprise and a shock to the reading world, for so full of constant vitality and scarcely diminished intellectual power was he that such an event was not thought of as at all likely to occur for many years. Robert Browning died at 10 o'clock last night without any suffering." 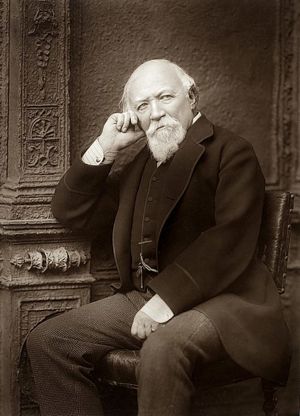 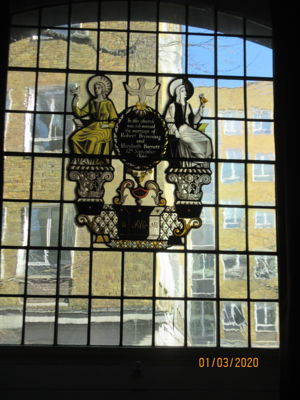