Enos Browning is named as a son of Nicholas Browning in Nicholas' 1787 will, recorded in Caswell County, North Carolina, in which he and his heirs are to receive a "feather bed and furniture." [1]

Sarah, named in Nicholas 1787 will as Nicholas' wife, was Sarah Washburn. She was the mother of Nicholas' children.

Hurley shows Enos Browning born about 1751[2] Enos' birth has been reported as 24 November 1751 but the source of this information is unclear. In 1751 Nicholas Browning and his family were living in Culpeper County, Virginia. Enos Browning is shown as an adult at the time of the 1787 will, thus he was born not later than 1766.

Enos had a number of siblings, some of whom appear in his life later on.

Enos' uncle Edmond and cousin Joshua were living at the time of the will and appointed as executors. [2]

The year of the marriage is uncertain. Hurley gives it as 1776, pehaps in Caswell County, North Carolina.[2] In 1853 the heirs stated it had occurred about 1777 or 1778. [5] Two years later, when Enos' younger brother Francis testified, at the age of 101, Francis recalled that the marriage occurred at the close of the war, (which ended in 1783) in North Carolina, by a magistrate.[3]

In 1834, Jane (by then aged about 84) was "very old and poor", depending entirely for support on the charity of her relations. [6]

Francis restified that when he moveds to Russell (then Washington) County, Enos' family lived there, but Enos was in service of the Revolutionary War. [6]

Enos enlisted in 1777 [8] in Culpeper County, Virginia [5]; alternatively, he enlisted in 1777 or 1778 in the "Virginia militia on the continental establshment." It has been noted that the statement that Enos Browning “enlisted into the Virginia Militia on the continental establishment” makes no sense. Virginia militias were never on Continental Establishment. Since militia tours were generally for three months each, it appears that Browning served in the Continental Army. [9] He served under the command of General Nathaniel Greene [5]

Jesse Vermillion testified that he stopped to see Enos at Camden, South Carolihna, but couldn't due to lack of time. [10]

On 5 Feb 1856 Caleb Browning, 38, stated that his grand-mother, Jane Browning, had died on 15 Sep 1842, and that her children Edmund, Francis, James, John, and Jacob were still living. The file includes a letter from James T. Browning of Saltville VA dated 26 July 1858 to the Secretary of War alleging that the agent who handled the pension had charged $350 out of the $450 awarded. [11]

On 2 Oct 1854 John Vance and David Robinson of Logan County stated that the children of Jane Browning were named Henry, Charles, Caleb, Betsey, Francis, Edmund, James, John, and Jacob Browning, that she died about Nov 1842 at the Left Hand Fork of Island Creek in Logan County, that Caleb and Betsey were dead, and that Henry and Charles were believed to be dead. [11]

Birth years are uncertain. Children are shown below in the order named by Vance and Robinson.

Was Enos Browning the son of John Browning and Elizabeth Demarest?

Judge Grimsley's account of the Browning family in Culpeper, Virginia, follows Edward Franklin Browning in showing Enos to be a son of John Browning and Elizabeth Demarest. [7]

In contrast to these narratives, the will of John Browning, which appears below, is very specific in naming John's children, including Joshua, who is cut off with only one dollar. There is no Enos mentioned. Enos IS, however, named in the will of John's brother Nicholas.

The John Browning in question was born in Culpeper County, Virginia, where he married Elizabeth Demarest, the mother of his children. The family moved to Caswell County, North Carolina, where Elizabeth died and John married Susannah Teague Boren. John subsequently moved to Greene County, Georgia, where he died. His will was dated October 7,1803 and recorded January 29, 1804 in Greene County Will Book D. He names his wife and children, providing the married names of his daughters. [13]

Daughters of the American Revolution

Application was made to the DAR based on the records of Enos Browning, who married Jane Trimm, however it was determined that Enos was a son of Nicholas Browning. [14]

1787 Will of Nicholas Browning

I. Nicholas Browning of the state of North Carolina and county of Caswell being weak in body but of sound mind, memory and understanding do this twenty third of October in the year of our lord one thousand seven hundred and eighty six make and publish this my last Will and Testament and none other.

In the name of God Amen. I John Browning of the County of Greene and State of Georgia- Being sick and weak in body but sound and perfect memory and calling to mind the transitory things of this life do make, constitute, and ordain this to be my last will and testament, revoking all other wills heretofore made by me.

he further says he believes Enos Browning enlisted in the Virginia line Given under my hand this 16 day of Jan’y. 1840

The Declaration of the Heirs of Enas Browning – In Order to Obtaine the bennifit of the Act of Congress of the 7th of June 1832.[5]

State of Virginia County of Washington

Sponsored Search by Ancestry.com
DNA Connections
It may be possible to confirm family relationships with Enos by comparing test results with other carriers of his Y-chromosome or his mother's mitochondrial DNA. However, there are no known yDNA or mtDNA test-takers in his direct paternal or maternal line. It is likely that these autosomal DNA test-takers will share some percentage of DNA with Enos: 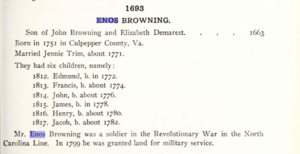 Jack Day
Since different sources show different parents for Enos, I've temporarily re-arranged the biographical material to show which facts belong to Enos son of John, which to Enos son of Nicholas, and which to either. If the end result is to prove there are two different Brownings named Enos, a new profile will be created for one of them.
posted Sep 01, 2021 by Jack Day

Jack Day
Extensive research indicates that (1) Enos is not named in the will of John Browning (2) Enos is named in the will of John's brother Nicholas (3) no evidence has been found for there being two men named Enos Browning in this time. Therefore the evidence seems overwhelming that Enos is the son of Nicholas, not John Browning. As much documentation as possible has been placed in the biographical narrative.

Edward Franklin Browning's 1908 book has been the "go-to" book of Browning genealogy. However, in case after case, as with Enos, the material in that book has been found to be in error.

If there is no objection, Nicholas Browning and Sarah Washburn will be connected as the parents for Enos.

So....according to the genealogy by Edward Brown you cite in your first paragraph, the parents of Enos are John Browning and Elizabeth Demarest. The Demarest genealogy I've added to the source list also lists Elizabeth Demarest and John Browning as his parents. Also (even more importantly) the Sons of the Revolution membership application (I have added it to the source list) which lists them as his parents was reviewed and approved for membership in 1958. I believe the Enos Browning mentioned in the will of Nicholas (which you cite) is a different person. For one thing, the will doesn't mention that Enos being married to Jane. And second, Nicholas makes his "beloved brother Edmond" an executor. The SAR application shows that "our" Enos had a son named Edmond, so perhaps the Nicholas who wrote this will is our Enos's son and not his father (but this is just a guess and needs research). I propose that Nicholas Browning and Sarah Washburn be detached as Enos's parents and John Browning and Elizabeth Demarest be added as his parents instead. Are you comfortable with this? Jen

Therese (McIntyre) Browning
My Gedmatch key ZG5038854 is under the new genesis site for 23andme v. 5 chip . I match quite a few of my relatives. Enos Browning would have been my 5th Great grandfather.
posted May 10, 2018 by Therese (McIntyre) Browning
Tom Coley
Browning-445 and Browning-432 do not represent the same person because: DIFFERENT PARENTS
posted Apr 02, 2018 by Tom Coley
[Living Russell]
A667758 is my GEDMATCH. I match several on this list, so if you match me, your research is on point.

Willie Brewer and Charlene Watros are matches for me.

Anne Baker
This profile does not list the sisters "Sarah and Jean".... as referenced in this will. Also, In reference to some of the other children listed from the will .. We have those names listed as Enos' children.... This will appears to be that of Enos Father.... therefore, making it not about the same people/generations. Definitely needs much more researching.
posted Oct 28, 2015 by Anne Baker
A M
Enos Browning (Rev. War Vet.) h/o Jane Trim is the s/o Nicholas Browning and Sarah Washburn per Will of Nicholas Browning.

Maggie N.
Browning-432 and Browning-462 are not ready to be merged because: Until parents are settled, it would be great to get the 1776 project protection on this profile. Married to same wife ?

Need sources other than family trees for parents.

Maggie N.
It would be great to settle the parental difference and protect this profile for the 1776 project because of his American Revolution ties.