Robert the Bruce died when David II was only five. So he wound up a boy king, and was deposed and restored as he vied with Edward Balliol. He also spent about 20 years facing captivity, but seems to have stabilized his rule during the last decade of his life.[1][2]

Married off at four-years-old to a seven-year-old Joanna, David remained married to her for 34 years. But said to be a loveless match, they never had kids.[1]

A few years after his release by the English, he went on to marry Margaret Drummond in February of 1364 ... but the couple divorced without issue on 20 March 1370. He died the next year, and the throne passed to the Stewarts through his nephew Robert.[1] 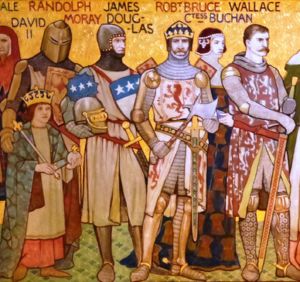 David II is 21 degrees from Jaki Erdoes, 19 degrees from Wallis Windsor and 8 degrees from Henry VIII of England on our single family tree. Login to find your connection.