Isambard Kingdom Brunel was a British civil engineer. He was responsible for numerous innovative designs and constructions which revolutionised engineering and public transport in Britain and beyond.

Isambard Kingdom Brunel was born on 9 April 1806, the son of Marc Isambard Brunel and Sophia Kingdom. He was baptised at St Mary's, Portsea, Hampshire, on 1 November 1806.[1] Brunel's father, Marc, was an engineer, and at the time of Isambard's birth he was working on block-making machinery for the Navy at Portsmouth Docks. [2]

In 1808 the family moved to London,[3] where Brunel's father Marc was engaged on work designing machinery for government mills at Woolwich and other places. [4]

Brunel was educated at boarding school in Hove, and later, at the age of 14 he was sent to France to study at the University of Caen and the Lycée Henri-IV' in Paris. His father wanted him to continue his studies at the prestigious Paris École Polytechnique, which specialised in engineering, but because of his British birth he was ineligible. [3] He then studied for a time with Abraham-Louis Breguet, a famous French horologist, before returning to England in late 1822. [3]

Brunel's first engineering post was as assistant engineer on his father's Thames Tunnel project. [3] After that, however, he was involved in a multitude of important, innovative and sometimes quite extraordinary projects. These are too numerous to list in full, but included:

The couple had three children:

The 1841 Census records Brunel as staying in the Lion Hotel, High Street, Bath. His occupation is recorded as Civil Engineer. [6] He was probably there overseeing the new extension of the Great Western Railway from Bristol to Bath. The section which runs through Bath's Sydney Gardens had been started in 1839, and the first train ran on this part of the line on 30 June 1841, [7] just 24 days after the Census had been taken.

In 1851 the Brunel family was living in two houses (numbers 17 and 18) in Duke Street, Westminster, London (The one in St James', not the one in Mayfair). The large household consisted of Brunel, his wife Mary, their 3 children, his mother Lady Sophia Brunel, and 11 household staff including a teacher and a butler.[8]

He is buried in Kensal Green Cemetery in a family plot. [12]

Although, unlike his father, Brunel was never awarded a knighthood (possibly due to his early death), his achievements were recognised and honoured.

In 1830 he was awarded Fellowship of the Royal Society. His proposers included the eminent scientist Michael Faraday and the engineer Richard Zachary Mudge, author of the 1837 publication Observations on Railways, with reference to Utility, Profit, and the Obvious Necessity of a National System. [13]

In 1857, two years before his death, Brunel was honoured by the University of Oxford by being made a Doctor of Civil Law (DCL). [14]

Brunel's legacy lives on, of course, in the numerous engineering accomplishments that are still in use to this day. His achievements have, however, been honoured in many other ways. These are too numerous to list here, but include the following.

In 2002 Brunel was voted second in a BBC poll of the 100 Greatest Britons (second only to Winston Churchill), and in the opening ceremony of the 2012 London Olympics he was portrayed as a symbol of the Industrial Revolution.

In 2006, the 200th anniversary of his birth, the Royal Mint produced two commemorative £2 coins, and the Post Office issued six commemorative stamps depicting the Royal Albert Bridge, the Box Tunnel, Paddington Station, the Great Eastern, the Clifton Suspension Bridge, and the Maidenhead Bridge.

Brunel University, founded in 1966, is named after the engineer.

Is Isambard your ancestor? Please don't go away!

ask our community of genealogists a question.
Sponsored Search by Ancestry.com
DNA
No known carriers of Isambard's DNA have taken a DNA test. 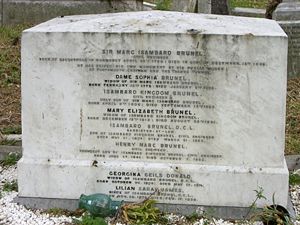 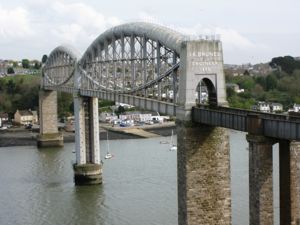 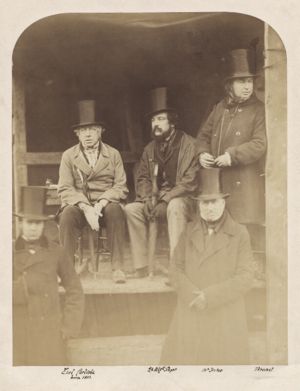 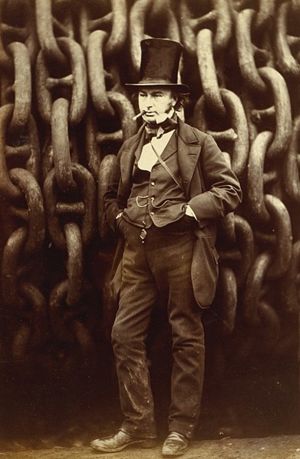 Construction of the Royal Albert Bridge 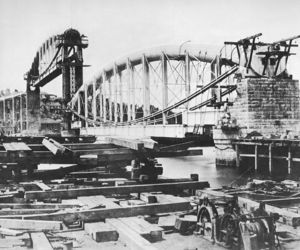