John Bryant and Grace Wayford were not the parents of the immigrant John of Scituate. John and Grace had a son John Bryant of Bampton, whose will was proved 1641.

John Briant of Scituate was active in public affairs, a land owner, and frequently a surveyor of public lands. He was a member of the Plymouth General Court in 1657 and 1677/78.[1]

A family tradition states he came from Kent, England in the Ann. He settled first at Barnstable and removed to Scituate by 1643. His name is on a list of freeman in 1639 and on the 1643 list of men able to bear arms in Scituate.[1]

He married three times[1]
Married: 1st - Mary Lewis, daughter of George and Mary (Jenkins) Lewis of Barnstable on the 14th of November, 1643 in Scituate, Plymouth Colony.[2] She died 2 July 1655 in Scituate, after bearing 7 children.[3]

Married: 2nd - Elizabeth Wetherill, daughter of Rev. William Witherill of Scituate, on the 22nd of December, 1657 in Scituate, Plymouth Colony.[4] She died between January 1661/62 and April 1664, after the birth of her daughter and before the remarriage of her husband to Mary Highland.[5] There are no other children recorded for John before he remarries to the below Mary, in April, 1664.

Children of John Bryant and Mary Lewis:
All recorded in Scituate.[1][7] 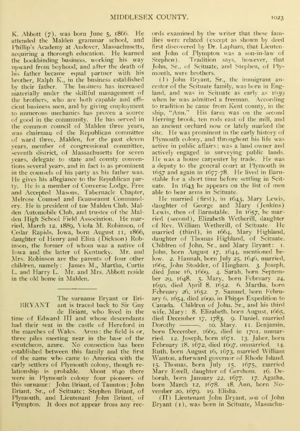 Leave a message for others who see this profile.
There are no comments yet.
Login to post a comment.
Nace Few
Hello PGMP, Jack, Darin &/or Sandi,

I have created the below profiles for the missing children of John Bryant & his wives, but could not add them because the parent profiles are "Project Protected". If you could add the profiles to John & his last two wives:

Joe Cochoit
I added them. There is a little bit of tuning up and explaining to do:

How do we know which children belong to Elizabeth Wetherell and which to Mary Highland?

As to your questions:

- Joseph, bp. 1667, was placed there over 2 years ago. I've now placed him with the correct marriage.

Anne B
John Bryant and Mary (Hiland) have been added as parents of Ruth. Thank you
posted Dec 28, 2019 by Anne B
Cherry (Cushing) Duve
I would like to have Thomas Bryant (Bryant-192) added as the son of John Bryant Sr. and Mary Highland (Hiland). He is already listed in the list of John's children in the profile but the profile is not linked. Cherry Cherry Cushing
posted Dec 26, 2019 by Cherry (Cushing) Duve

Anne B
John Bryant and Grace Wayford were not the parents of the immigrant [[Bryant-8|John of Scituate. Their son John was John Bryant of Bampton. Will proved 1641. I am going to disconnect said.
posted Mar 14, 2018 by Anne B
Bob Tonsmeire
Bryant-2021 and Bryant-8 appear to represent the same person because: Same name, same parents, same son
posted Jul 16, 2015 by Bob Tonsmeire