John Buchanan was born in Hamilton, just south-east of Glasgow in Lanarkshire, Scotland on 9th February 1830. He had a brother Andrew, his parents were John Buchanan and Margaret Adamson.

He and Margaret emigrated from Glasgow via London for N.Z. per ship GANANOQUE in 1861 with two children, Andrew and Jean [3] [4]

In 1862, John Buchanan and Andrew Stewart were in partnership, operating as merchants and importers. Their address for business was advertised as Queens Wharf. [5] [6] The partnership was dissolved in 1869 and the business carried on in new premises in lower Queen Street (two doors from Steam Mills) on his own account. [7]

He set up business as a merchant in Custom Street West in Auckland. In 1885, he built the Masonic Building on two allotments at 34 Customs Street East from which to operate as a wholesaler of tea, coffee, spices and groceries.

John Buchanan owned land along the Whau River shoreline, between the railway line and bridge (north of Olympic Park) and the Whau Bridge at Great North Road. Their home was named "Rosebank".

He was one of the early elders of the Avondale Presbyterian Church and an agent for the first landowner, John Shedden Adam. And a man of "practical commonsense" [8]

The Buchanan family moved to Paeroa in 1891

took up land on the Waihi Road, Karangahake

He married the widowed Charlotte Oliver in 1903

Free Lance 27 January 1906 Page 3 [12]
All Sorts Of People
Mr. John Buchanan, one of Auckland's pioneer provision merchants. "Johnny" is a small person, of good quality, and pious. He was always, and is now, the essence of energy. He buzzes around like a bluebottle, andi is over eighty years of age. A couple of years or so ago "Johnny" got married for the second time, and quite lately, feeling; fit for anything, he took up the work of commercial travelling for the firm, and is the oldest — but not the slowest — "commercial" on the road. He has various other sons, notably "Johnny Buke," of Auckland, who inherits his father's fluent tongue, airy manner, and deftness of action. 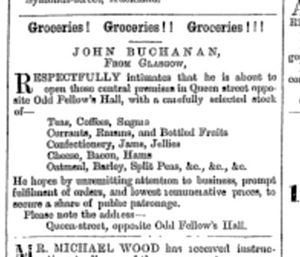