William Buel aka Buell
Born about 1610 in Wales

The parents of William Buel are NOT Robert Beville and Goode Buell. They are a fabrication of the fraudulent Albert Welles. DO NOT ATTACH THEM TO THIS PROFILE.

Please disregard Albert Welles' English history of William Buell. His American records are probably correct. BUT his William Beville died in England and has no validity, not even Beville's mother's name which was Coles not Goode. Robert Beville's 2nd mother-in-law.

William Buell was born in 1605. William was born about 1610. Another source puts his birth at September 2, 1605.[citation needed] A Founder of Windsor, Hartford, Connecticut, meaning that he arrived before 1640. (Windsor, Connecticut Wikipedia Page).

William Buell married 18 November 1640 to Mary _____. She is sometimes called Mary Thomas or Mary Post, but no historical information has been found that would support either ancestral clue.[4]

A Welshman,[5] joiner by trade; he was a Founder of Windsor, Connecticut.[6]


Memories: 2
Enter a personal reminiscence or story.
Christopher Daleske
It was already briefly mentioned I believe above but this seems to be a good source document to follow the direct line of many of the Buells from their landing in the colonies forward. At the very least, it can help individuals with a start point. I found it online and can be free downloaded in google play to your computer.

History of the Buell Family in England from the Remotest Times Ascertainable from our Ancient Histories and in America, From Town, Parish, Church and Family Records compiled by Albert Welles, President of the American College for Genealogical Registry, Family History and Heraldry, Society Library, New York 1881

posted 4 Jul 2015 by Christopher Daleske   [thank Christopher]
Ed Poor
He died in London in 1637. Not America

He paid to have his families monument improved in his church. He and his brother Robert entered together Grey's Inn of Court London to practice law at an early age. In his Will he left money to the poor and gifts to children of his mother's [Maria Coles] first marriage as well as to the Rector of the Church

posted 13 May 2013 by Ed Poor   [thank Ed]
Login to add a memory.
Sponsored Search by Ancestry.com
DNA
No known carriers of William's DNA have taken a DNA test. 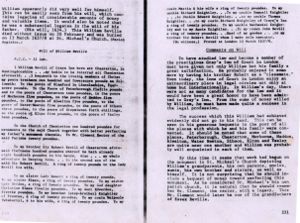 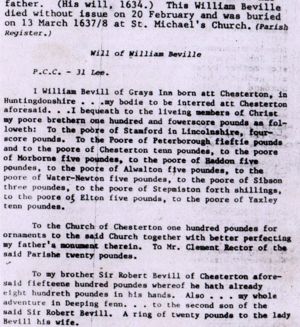 Kay (Johnson) Wilson
I see nothing in the biography to indicate that he was born in Wales. The Great Migration Directory (page 48) indicates his origins are Unknown. Should Wales be deleted from his birth location?
posted Jul 07, 2020 by Kay (Johnson) Wilson

"At least he doesn't say he was a Beville of Huntingdonshire. England. Henry Stiles called him a " Welchman". That's where it came from. Via "History of Ancient Windsor CT" page 153 Vol 1 Believe him or not, At least it deserves a mention to start searching I searched an online phone book. No Buels any spellings. current when I checked. Years ago. Ed"

posted Jul 09, 2020 by Kay (Johnson) Wilson
Ed Poor
Bevilles Mother Maria COLES died in 1610. William was born in 1605. Would someone PLEASE READ!! Asailia Licliter and her fellow reseachers book " 700 Years OF THE BEVILLE FAMILY etc." and did the actual research, not Welles and his apparently lazy "researches" who {I guess} did not go to the Courts to find the Will and Church Where the Bevilles were buried.

Dare I ( ) be to ask if Mr Anderson travels to anywhere to check his workers research. Some claim his parents died over here when very well they were known to have died in England and one was his stepmother not mother.

Anne B
I'm sorry, but I don't think I understand. Isn't the William Beville that you speak of (died childless 1638ish in Chesterton) an entirely different person than this profile.
posted Jun 24, 2020 by Anne B
GeneJ X
For his date of death, why are we reporting 23 November 1681 in the vital data as opposed to the date given in the historical record, 16 November 1681?

Did Welles provide a reference for his alternate date (23 November 1681)?

posted Oct 31, 2014 by GeneJ X
GeneJ X
Hoping to learn how we come to know if William died at England and in 1637 or in the colonies still much later? (See entry in "Memories.")

Thank you in advance.

posted Oct 31, 2014 by GeneJ X
Ed Poor
Do not merge this with William Beville NOT a Buel no matter who said it.

Albert Welles did a very botched up, guessed at tree. Even he said "IT APPEARS TO BE,,,,,,"

posted May 13, 2013 by Ed Poor
Ed Poor
Sorry this is not William Beville who died in England in 1638. He was a lawyer or Barrister in London, Not a carpenter. His Will which names his sisters and others mentioned by Welles was probated in 1638. Find Asselia Lichliter's "700 Years of the Beville Family in England" His mother or 1st wife did die here. Goode was probably short for Goodwife a common title of respect. ADD this fact William Beville's mother was Maria Cole who died about 1610. His step grandmother was Elizabeth Goode. Mother of Catherine Hampson who separated from his father and died a wealthy woman.

The notion of Albert Welles and his researchers was totally twisted. Beville was never Buel