We regret to announce the death of Mr. S. F. Bolger, which took place at the residence of his son in-law, Mr. Flynn, Sydney, on the 8th instant. The deceased gentleman was a well-known resident of Bathurst in former years, and was an active member of SS. Michael and John's Cathedral congregation, contributing solidly but unosten- tatiously to the Cathedral erection, For upwards of thirty years he was in business in that city, and in the very early days his hostelry was almost wholly the resting-place of the Judges and Bar risters engaged in the Western Circuit. In his younger days Mr. Bolger was employed by his father — a master carrier — in delivering produce from the Western District by teams to Sydney, and in that connection earned the reputation of being the most expert driver that ever piloted a team over the then perilous Blue Mountain track to the Haymarket, Sydney. Deceased was 73 years of age at the time of his death. His end was materially hastened by the death of his wife, which occurred a, few years ago. He was a devout Catholic, and died fortified by the rites of the Church. The remains were interred at Rookwood on Mon day afternoon, alongside those of his wife and his daughter, Miss Helen Genevieve Bolger. R.I. P.  [1]

ask our community of genealogists a question.
Sponsored Search by Ancestry.com
DNA Connections
It may be possible to confirm family relationships with Simon by comparing test results with other carriers of his Y-chromosome or his mother's mitochondrial DNA. However, there are no known yDNA or mtDNA test-takers in his direct paternal or maternal line. It is likely that these autosomal DNA test-takers will share some percentage (beta) of DNA with Simon: 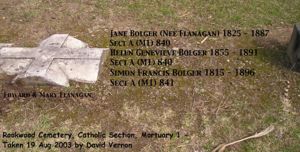 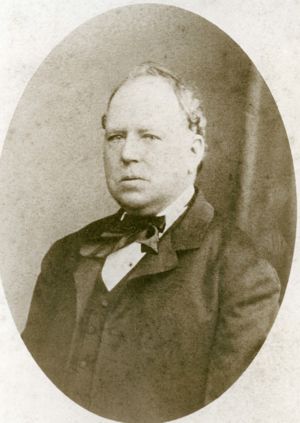 At Bulger is where our trees meet (more or less) and these should be merged. My notes show that while he was born "Bulger" by adulthood he had changed to "Bolger". I also have some references to it being Boulger. As for birth date, his convict indent says he was born in 1815 while his father's death cert gives 1825 and his own death cert 1823! Oh joy. Cheers, David