Joseph Burdette
Born about 1789 in Virginia

"Joseph Burdette, the father of Lewis, was born in 1789 in Virginia, this date being calculated from census information. He married Dicy Burns, the daughter of Thomas Burns (said by Oren Morton to have had a brewery in Union), on 7 October 1811 in Monroe County, VA/WV. Dicy was born around 1788 in Virginia. Neither death nor burial information has been found for either Joseph or Dicy.

Ten children have been documented for Joseph and Dicy:

At this point the trail goes very cold. Some researchers, in the absence of documented proof, say the most probable parents of Joseph Burdette are Giles Burdette, b. 1749 and Sarah Dunbar Burdette, b. 1753. Giles died in 1829 in Monroe County, VA/WV.

In A History of Monroe County, West Virginia by Oren F. Morton (1916), the early Burdettes in Monroe County are outlined. William Burdette, who died in 1836, came to Monroe County from Culpeper County and was a son of James Burdette. Morton also mentions Giles Burdette who died before 1829 and married Sarah Dunbar. He lists only one child, John (1794-1882), for Giles, but this history is not meant to be a genealogical study, and most assuredly Giles and Sarah had other children. On the website www.hackerscreek.com, Don Norman says that Giles was the son of James Burdette and was born ca 1775. If this is the case, it's doubtful that Giles is the father of Joseph who was born around 1789. The more logical conclusion would be that Joseph and Giles were brothers, both the son of James.

In Early Virginia Immigrants, 1623-1666, George C. Greer (1912), we find William Burdette arriving in Accomack County in 1639, and Chris Burdette arriving at the York River in 1649, which is around 100 years before James Burdette appears in the Culpeper records.

This is a skein of yarn that appears to have no ends at all. It's certainly a puzzle, but it would also appear quite certain that Joseph Burdette was related in some way to these early Burdettes. The tricky part will be to prove exactly how he's related to them. "[1]

He is listed as age 61 and head of household in the 1850 US federal census for Monroe Co. Virginia.[2]

He is listed as age 70 and head of household in the 1860 US federal census for Greenbrier Co. Virginia.[3] 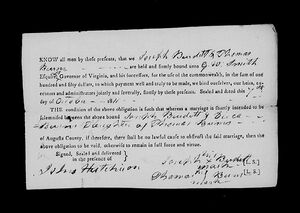 Leave a message for others who see this profile.
There are no comments yet.
Login to post a comment.
K. Bloom
Burdette-390 and Burdette-3 appear to represent the same person because: I believe these are duplicates, please review. In addition, Burdette-3 should not be private as it is 200 years old. Please review your settings. Many thanks!
posted Oct 12, 2016 by K. Bloom